The Young and the Restless Spoilers: Wednesday, December 12 – Lauren Lays Down the Law – Abby’s Bold Plan 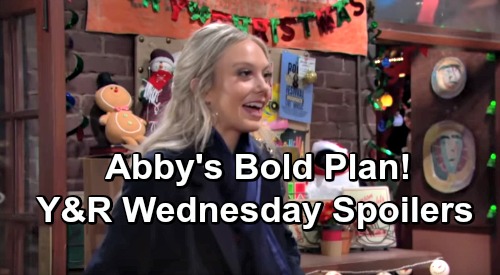 The Young and the Restless (Y&R) spoilers for Wednesday, December 12, tease that Cane (Daniel Goddard) will hope to patch things up with Devon (Bryton James). There’s been plenty of conflict between them lately, but that’s certainly not what Cane wants. He only thinks Devon should find some better coping strategies and process his grief in a healthy way.

Of course, Devon feels like Cane’s overstepping a bit. He needs the support of his loved ones, but he also needs a chance to mourn without too much pressure. There must be some common ground for Cane and Devon to find, so that’s exactly what they’ll do on Wednesday. The Young and the Restless spoilers say they’ll acknowledge each other’s perspectives and finally make peace.

Elsewhere, Abby (Melissa Ordway) will focus on a new deal. She snatched up a space, but her plans for it will be complicated. Since Nick (Joshua Morrow) won’t budge on giving her help, Abby will count on Devon to come through for her. If you’ve got a project to tackle in Genoa City, it makes sense to call the sweet billionaire.

In Tuesday’s Y&R episode, Abby mentions the idea of opening a restaurant that transforms into a bar at night. She believes it’ll be a huge hit since the rest of GC closes up so early. However, there are still risks involved and it all boils down to money.

Devon may be hard to convince, so Abby will come up with a scheme to butter him up on Wednesday. She’ll think a nice dinner should become part of her pitch package. The Young and the Restless spoilers say Lola (Sasha Calle) will be approached about catering it later this week.

In the meantime, Lauren (Tracey E. Bregman) will lay down the law with her son. Fen (Zach Tinker) recently moved back home to save money while pursuing his music career. Naturally, that doesn’t mean he can get by without making any kind of income contribution. Even if Fen beats the odds and becomes a huge superstar someday, he needs some money coming in right now.

Lauren will make that perfectly clear and Michael (Christian LeBlanc) will undoubtedly back her up. The Young and the Restless spoilers say Fen will begin a job hunt, but it won’t take him long to find one. He’ll offer to help Lola out with her food truck and some catering gigs, which will give him cash and a chance to get to know her better.

It sounds like Kyle (Michael Mealor) will face some infuriating news soon! We’ll give you updates as other Y&R details emerge. Stay tuned to the CBS soap and don’t forget to check CDL often for the latest Young and the Restless spoilers, updates and news.