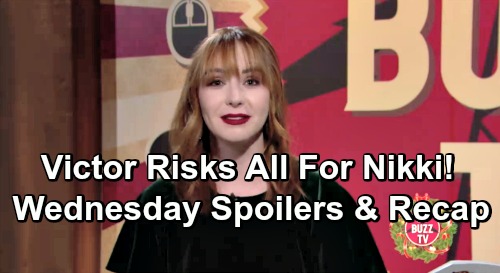 The Young and the Restless (Y&R) spoilers update and recap for Wednesday, December 26, tease that it’ll be a sentimental day in Genoa City. It’ll still be Christmas as Mariah Copeland (Camryn Grimes) kicks off a special edition of GC Buzz. She’ll read some moving messages from fans and talk about the importance of memories.

At the end of the show, Mariah will share a story of her own. She’ll pull out the snow globe Sharon Newman (Sharon Case) gave her for Christmas last year and tell GH Buzz viewers what it means to her. Since it belonged to Cassie Newman (Camryn Grimes), Mariah cherishes it. This is something her sister held in her hands, so it’s easy to see why it touches her heart.

At Devon Hamilton’s (Bryton James) penthouse, he’ll be in a gloomy mood over Hilary Hamilton’s (Mishael Morgan) death. Ana Hamilton (Loren Lott) will do her best to lift her brother’s spirits. Nate Hastings (Brooks Darnell) will do the same, but Devon will suggest it’s not going to make him forget Hilary’s gone.

Nevertheless, Devon will be thankful to have some support. He’ll discuss his complicated family history and how Ana fits in. They’ll also bring up an old recipe and decide to give it a try in the kitchen. However, Devon will remain glum as he gazes at last year’s Christmas card from Hilary. He’ll talk to Nate about his therapy and they’ll both open up about their deceased loves.

At Victoria Newman’s (Amelia Heinle) place, Billy Abbott (Jason Thompson) will help her give their kids the best Christmas ever – at least according to Katie Abbott (Sienna Mercuri)! After a day full of fun, Billy will reflect on being a bit naughty this year. Victoria will suggest that Santa won’t hold it against Billy. He’s been too kind and supportive lately to end up with coal in his stocking.

Other Young and the Restless spoilers say Jack Abbott (Peter Bergman) will spend Christmas with his mother. Dina Mergeron (Marla Adams) won’t remember who Jack is, but he’ll sit and chat with her anyway. Eventually, they’ll both recall some memories of previous Christmases and give each other a holiday hug.

At the hospital, Victor Newman (Eric Braeden) will stay right by Nikki Newman’s (Melody Thomas Scott) side. He’ll insist that he had to come see his love. This move could bring consequences thanks to the J.T. Hellstrom (Thad Luckinbill) case and Rey Rosales’ (Jordi Vilasuso) mission to bring Victor down. However, Victor won’t want Nikki to worry about any of that. He’ll just want her to come back to him.

Y&R fans can expect some sweet moments as Victor has flashbacks. He’ll remember his first Christmas with Nikki and contend that she taught him how to love. Victor won’t be able to imagine a world without Nikki in it, so he’ll beg her to recover. He’ll ultimately climb in bed next to Nikki as he hopes for a miracle.