BY Heather Hughes on February 19, 2018 | Comments: one comment
Related : Soap Opera, Spoiler, Television, The Young and the Restless 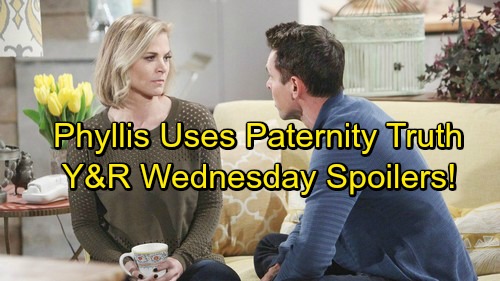 The Young and the Restless (Y&R) spoilers for Wednesday, February 21, tease that Phyllis (Gina Tognoni) will consider the new proof. With Kevin (Greg Rikaart) and Sharon’s (Sharon Case) help, Phyllis gets her hands on DNA evidence in Tuesday’s episode. The info from the police database confirms that Christian (Jude and Ozzy McGuigen) is Adam’s (Justin Hartley) son.

On Wednesday, Phyllis will have to decide what she’s going to do about that. The Young and the Restless spoilers say Phyllis will meet up with Billy (Jason Thompson) to discuss a new plan. She’ll need his assistance as she works to bring down Chelsea. Phyllis is fed up with all the lies and manipulation tactics. She’ll hope that Chelsea will pay the price once she puts the rest of her scheme in motion. 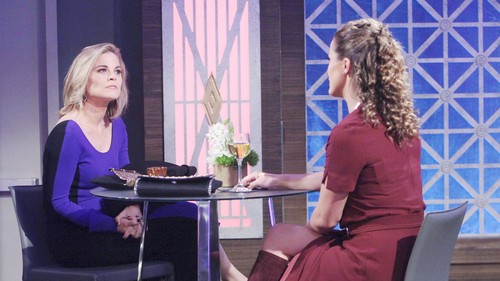 In the meantime, Y&R fans can expect plenty of tension between Chelsea and Phyllis. The Young and the Restless spoilers state that they’ll trade barbs and dirty looks. However, Chelsea will be terrified deep down. She may fear that spilling the paternity secret was a bad idea. After all, Phyllis just handed Chelsea more ammunition to use against her.

Sharon and Phyllis don’t want Nick (Joshua Morrow) to get hurt, but doesn’t he deserve the truth? As painful as it is, Nick would undoubtedly rather hear about this now instead of years down the road. That goes for many Y&R viewers, too! This secret will indeed be revealed to Nick before Chelsea’s exit, so stay tuned.

Elsewhere, Hilary (Mishael Morgan) will reach out to Devon (Bryton James). Now that he’s had a chance to cool off, Hilary will hope she can make amends. Unfortunately, Devon will remain annoyed and disappointed. He’ll shut Hilary out in Wednesday’s episode, so Hilary will continue to mope.

Hilary wants Devon back, but her old transgressions have caused another stumbling block. The Young and the Restless spoilers say a “Hevon” reunion is still in the works, but this obstacle will cause a bit of a delay. What will it take to make Devon forgive Hilary? There’s surely something that can shift the situation sooner or later.

It sounds like some exciting scenes are coming up. We’ll give you updates as other Y&R news emerges. Stick with the CBS soap and don’t forget to check CDL often for the latest Young and the Restless spoilers, updates and news.