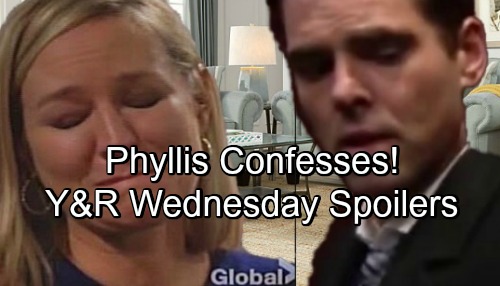 The Young and the Restless (Y&R) spoilers for Wednesday, July 25, tease that Phyllis (Gina Tognoni) will make a stunning confession. Since she clearly needs to come clean about her hookup, perhaps that’ll be the topic. Kyle (Michael Mealor) might put Phyllis in a position where she simply has no choice.

Of course, that doesn’t mean Phyllis will tell the whole truth. She could easily leave out Nick’s (Joshua Morrow) name, especially since she promised to keep their one-night stand a secret. Phyllis may be willing to blow up her own relationship, but Nick wouldn’t appreciate it if she blew up his, too.

However, secrets have a way of getting out on Y&R. The Young and the Restless spoilers say Sharon (Sharon Case) and Nick’s romance will indeed hit a few more bumps. Although Nick’s betrayal is huge, Sharon’s also been lying about J.T.’s (Thad Luckinbill) death and the cover-up that followed. It sounds like deception could lead to a real explosion for “Shick.”

As for Phyllis, she’ll also stop by the hospital soon. Phyllis will want to be there for Hilary in her time of need. She won’t want her pal to throw in the towel, so Hilary will promise to fight. The Young and the Restless spoilers say they’ll share some incredibly emotional moments.

Meanwhile, Mariah (Camryn Grimes) and Tessa (Cait Fairbanks) will tackle a crisis. In Tuesday’s episode, Tessa admits “the other woman” was actually someone she hired to find Crystal (Morgan Obenreder). She didn’t pipe up because her sister’s a fugitive and this mess could’ve gotten Mariah in trouble.

Mariah will understand that Tessa was trying to protect her, but that doesn’t mean she’ll agree with her decision. At some point, Tessa just has to trust Mariah. If they can’t be completely honest, they’ll never be able to move forward.

Mariah will stand her ground on that and address the issue of Crystal’s location. She won’t approve of Tessa’s plan to leave town to be with her. Even if Tessa only intends to visit, she’d be putting herself at risk. The Young and the Restless spoilers say Mariah and Tessa will have a tense discussion about their future, so stay tuned.

Elsewhere, Cane (Daniel Goddard) will patch things up with someone. Perhaps he’ll talk to Hilary (Mishael Morgan) any recent conflict between them and try to get back on track. They were friends for a while, so Cane may want to renew that friendship – even if Hilary doesn’t have much time left.

It looks like another exciting episode’s coming up. We’ll give you updates as other Y&R news emerges. Stick with the CBS soap and don’t forget to check CDL often for the latest Young and the Restless spoilers, updates, and news.