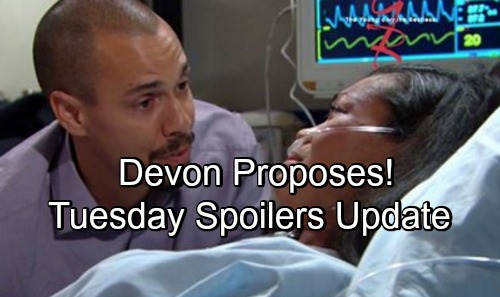 The Young and the Restless (Y&R) spoilers update and recap for Tuesday, July 24, tease that Devon (Bryton James) won’t want to hear Nate’s (Brooks Darnell) news. He’ll refuse to believe Hilary’s (Mishael Morgan) situation is as grim as it seems. However, Nate will urge Devon to accept that Hilary’s dying. He’ll talk about how important these final moments could be.

Devon will feel like there must be something Nate can do, but the doc will insist that there isn’t. He’ll suggest that a miracle might save Hilary, but the medical staff can’t. Nate will reflect on saying goodbye to his own love before her passing. He’ll urge Devon to soak up every last second with Hilary and make this time together count.

Devon will warn Nate to leave Hilary out of the loop. He’ll fear that she’ll stop fighting if she knows her prognosis. Meanwhile, Mariah (Camryn Grimes) will wrap up the show and announce that she’s going to visit Hilary. She’ll lash out when Tessa (Cait Fairbanks) suggests she’s worried about her.

At the athletic club, Cane (Daniel Goddard) won’t have much of a reaction to Jack’s (Peter Bergman) Dark Horse updates. When Jack wonders what’s going on, Cane will tell him about Hilary’s accident. Back at the hospital, Devon will fill Lily (Christel Khalil) in on Hilary’s condition. A little later, Lily will stop by Hilary’s bedside and beg for forgiveness.

Hilary will assure Lily that there’s nothing to forgive. She’ll be excited about a new beginning once she’s recovered. When Jack pops in, he’ll let Hilary know how glad he is that they’re friends. The Young and the Restless spoilers say Jack will give Hilary a gentle peck on the head before he exits.

Mariah will also drop in for some sweet moments with Hilary. As they discuss the show, Hilary will crack a joke about Mariah blubbering on screen. She’ll quickly turn serious and thank Mariah for stepping up. Hilary will add that she’s worried about losing Devon. She’ll fear that he won’t want her without the baby, but Devon will return and set her straight.

Once Mariah’s gone, Devon will propose to Hilary. He’ll slip an engagement ring on her finger and promise to help her through her recovery. In the waiting area, Tessa will catch up with Mariah. Things will remain tense as Mariah stomps off and tells Tessa not to follow her.

At Crimson Lights, Tessa will once again push Mariah to talk. She’ll want to offer comfort, but Mariah will think Tessa’s girlfriend might appreciate it more. Y&R spoilers say Mariah will come clean about the embrace she witnessed. That’ll prompt a confession from Tessa as well.

It turns out Tessa hired a woman named Kimberly to track down her sister. Tessa will point out that Crystal (Crystal Obenreder) killed Zack (Ryan Ashton), so she thought it’d be best to leave Mariah out of this. Back with Lily, she’ll get a call from a cop. It sounds like she’ll face more questions about the accident soon enough.