BY Heather Hughes on July 24, 2018 | Comments: one comment
Related : Soap Opera, Spoiler, Television, The Young and the Restless 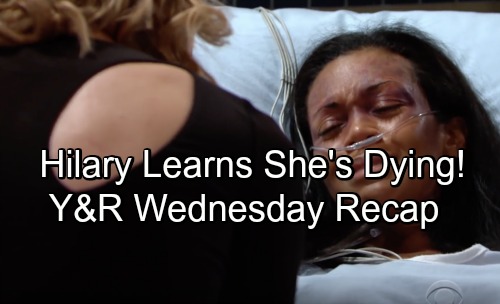 The Young and the Restless (Y&R) spoilers updates and recap for Wednesday, July 25, tease that Devon (Bryton James) will send out some wedding invitations. He’ll throw together a wedding as quick as he can, which will concern Mariah (Camryn Grimes). She’ll realize Hilary’s (Mishael Morgan) prognosis must be grim, but Sharon (Sharon Case) will push for positivity.

Meanwhile, Phyllis (Gina Tognoni) will visit Hilary and offer sympathy over the lost baby. She’ll also agree to be Hilary’s maid of honor, so she’ll get to work on her duties. Once Phyllis takes off, Cane (Daniel Goddard) will pop in for a sweet moment with Hilary. He’ll be sorry for pushing her away before. They’ll establish that the accident was just that – an accident. No one wanted anyone else to get hurt.

In the waiting area, Devon (Bryton James) will make an admission to Neil (Kristoff St. John). He’ll come clean about Hilary not having much longer to live, so Neil will pull him close for a hug. When Phyllis reappears, Devon will fill her in as well. The Young and the Restless spoilers say Phyllis will return to Hilary’s room with bridal gown options. She’ll do her best to avoid getting too emotional.

In the midst of the wedding prep, Hilary will finally realize what the rush is. She’ll get Phyllis to confirm that she’s dying – at least according to the doctors. However, Phyllis will push Hilary to keep fighting anyway. Hilary will vow to do just that, but she’ll still want to make the most of her time left on earth.

Over with Lily (Christel Khalil), she’ll answer a police officer’s questions. Lily will insist that a truck came out of nowhere and smashed into her vehicle. Nick (Joshua Morrow) will also ask Neil for some help on Wednesday. He’ll be looking for some PR assistance, but Neil will opt to stay out of Nick and Victor’s (Eric Braeden) war.

At the coffeehouse, Nick will spot Phyllis looking glum. Once she confesses the news about Hilary, they’ll share a warm hug. Y&R spoilers say Sharon (Sharon Case) will arrive and spot their embrace. However, Phyllis will quickly explain the situation with Hilary. After Phyllis takes off, Sharon will talk about feeling bad for her. She’ll also be glad she chose to stand by Nick.

Across town, Charlie (Noah Alexander Gerry) will get a guilty Shauna (Camryn Hamm) back to the hospital. Once she’s there, Hilary will reassure the teen that none of this is her fault. Shauna will agree to be Hilary’s bridesmaid at the upcoming nuptials.

At Hamilton-Winters, Mariah will have an important discussion with Tessa (Cait Fairbanks). She’ll suggest that maybe Tessa could clear her sister’s name. That way Crystal (Morgan Obenreder) could come back and Tessa wouldn’t have to leave Genoa City.

Unfortunately, Tessa will nix that idea. She’ll insist that Crystal can’t come out of hiding, so Mariah will offer another solution. If Tessa’s going, Mariah will plan on going, too. Of course, we know both Cait Fairbanks and Camryn Grimes are still taping. Even if they go off on some Crystal-related adventure, Mariah and Tessa aren’t making a permanent move together.