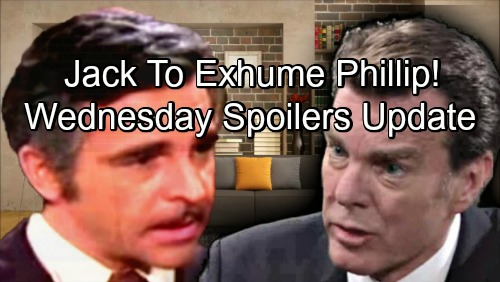 The Young and the Restless (Y&R) spoilers update for Wednesday, June 20, tease that Summer (Hunter King) will have a project meeting with Kyle (Michael Mealor). Of course, they won’t get much work done. That’s usually the case when Summer’s involved. Instead, she’ll strip down to a bikini by the pool and push Kyle to do her sunscreen.

When Summer suggests that Kyle’s been pining for her, he’ll deliver a sarcastic response. However, it’s clear that there’s some truth to Summer’s claims. In fact, Mariah (Camryn Grimes) will catch Kyle staring at Summer a little later. She’ll hint that Kyle needs to try looking less pathetic!

Summer will also offer her thoughts on “Philly” this Wednesday. She’ll tell Kyle that she doesn’t expect Phyllis (Gina Tognoni) and Billy’s (Jason Thompson) romance to last. Meanwhile, Devon (Bryton James) will surprise Hilary (Mishael Morgan) with a trip to St. Croix. Since Hilary’s been suffering with some morning sickness, she could really use this fun getaway.

Once Shauna (Camryn Hamm) gets updates, she’ll assure Devon and Hilary that she’ll be fine alone. Afterward, Shauna will text Charlie (Noah Alexander Gerry) with good news. She’ll let him know she’s got the whole penthouse to herself. It sounds like some teen trouble’s brewing!

Other Young and the Restless spoilers say Victoria (Amelia Heinle) will be in a panic. She’ll open an email that contains a startling audio file. After listening, Victoria will realize there’s a serious threat to Newman Enterprises. A distorted voice will insist that her secrets aren’t safe anymore. He or she will announce that Newman’s going to face destruction, so Victoria will certainly be alarmed.

After Victoria mentions the warning to Nick (Joshua Morrow), he’ll brush it off as nothing. Nick will suggest that maybe it’s just spam. Nevertheless, Victoria will feel like she should give Victor (Eric Braeden) the scoop. She’ll fill her dad in and reveal that she told Nick as well.

Victor won’t think Victoria should be blabbing about Newman business to Nick. He’ll want her to leave him out of this from now on. Later, Y&R spoilers say some boxes will show up. They’ll contain files on plenty of Newman contracts and transactions.

Victoria will once again tell Victor what’s going on. She’ll note that everything inside those boxes is highly sensitive, so the threat is very real. As a result, Victor will want to find the source ASAP. Across town, Cane (Daniel Goddard) will question Jack’s (Peter Bergman) sudden interest in the Chancellors. He’ll be suspicious of why Jack’s digging into Katherine’s (Jeanne Cooper) legacy.

Jack will explain his hunch that Phillip Chancellor (Donnelly Rhodes) might be his father. Cane won’t be sure he buys that. He’ll even hint that if Jack keeps stirring things up, they’re going to have a problem. Instead of backing down, Jack will make a stunning request. He’ll note that he hasn’t had any luck contacting Jill (Jess Walton), so he needs Cane’s (Daniel Goddard) help to exhume Phillip’s body.

It’s doubtful Cane will want to pitch in! The last thing he needs is someone gaining a stake in Chancellor and making a power play. The Young and the Restless spoilers say some great drama’s ahead, so stay tuned. We’ll keep you posted as other Y&R details emerge. Stick with the CBS soap and don’t forget to check CDL often for the latest Young and the Restless spoilers, updates, and news.