The Young and the Restless Spoilers: Jack’s Shocking DNA Twist – John’s His Bio Dad After All, Victor’s a Manipulative Monster

BY Heather Hughes on June 19, 2018 | Comments: one comment
Related : Soap Opera, Spoiler, Television, The Young and the Restless 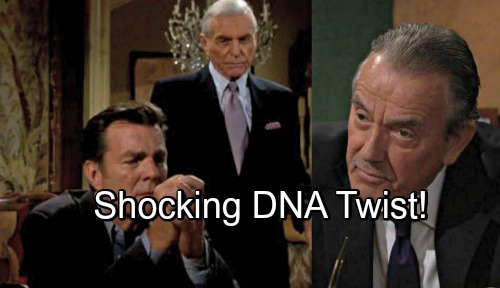 The Young and the Restless (Y&R) spoilers tease that Jack (Peter Bergman) is headed down a long and winding road. He’s determined to find out who his biological father is, but the journey won’t be easy. Jack is already hitting snag after snag. Nevertheless, he has no intention of giving up. Jack will do whatever he can to learn who he really is and discover more about where he came from.

Thanks to his latest clue, Jack believes Phillip Chancellor (Donnelly Rhodes) may be his bio dad. He’ll continue his mission to prove it or even disprove it. Either option would be beneficial to Jack’s search for answers.

Jack may eventually realize this is a dead end, but at least he’d be able to eliminate one possibility. It’d be a discouraging setback, but it’d also be a step forward in a way. Whatever happens, Jack will keep digging and try to figure out the whole truth.

Y&R spoilers say Kyle (Michael Mealor) will grow closer to Jack in the process. He’s invested in this father hunt as well. Kyle wants to help Jack seek closure and learn about his real grandfather. So far, he’s been feeling somewhat ignored in this “Jack isn’t a blood Abbott” storyline.

Kyle was affected by that news, so he’ll continue to be part of Jack’s exploration. The Young and the Restless spoilers say their father-son bond will get much stronger. That’ll be a bright spot in the midst of the uncertainty and frustration.

Of course, we know that major twists are coming up. Jack’s paternity mystery will bring plenty of surprises, including one at the end of this hot plot. Mal Young, Y&R’s head writer and executive producer, offered a big clue in an interview with Soap Opera Digest. He cautioned fans about getting bent out of shape so soon.

Young suggested that everyone should wait and see how this plays out instead. He was doing his best to calm the initial backlash, which was swift and fierce. People want Jack to be a blood Abbott and there’s a good chance he will be.

Perhaps the plan is to include some Y&R history and help Jack understand more about himself. He’s getting the opportunity to step out of John’s (Jerry Douglas) shadow and become his own man. Jack’s also seeing what Ashley (Eileen Davidson) had to go through. He’s bound to become a better son, father and brother thanks to all this.

Once this wild ride is over, Jack might find out he’s John’s son after all. The first DNA test could’ve been a mistake and the second one might’ve been manipulated. Jack may point the finger at Victor (Eric Braeden) in that case.

Maybe Jack will ultimately learn he’s indeed an Abbott by blood and Victor’s the same monster he’s always been! That could set up a doozy of a revenge storyline and keep the drama going. Regardless, The Young and the Restless definitely has some bombshells in store.

Are you anxious to see what’s ahead on the CBS soap? We’ll give you updates as other details emerge. Stick with Y&R and don’t forget to check CDL often for the latest Young and the Restless spoilers, updates, and news.