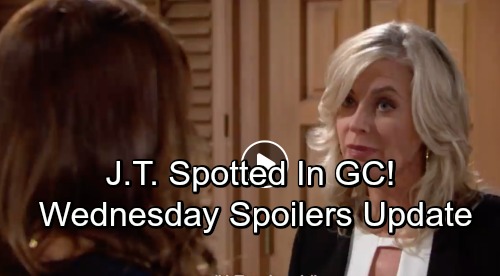 The Young and the Restless (Y&R) spoilers for Wednesday, June 27, tease that Newman Enterprises will fight back. A new article will dispel the negative buzz about Victor’s (Eric Braeden) health, but Ashley (Eileen Davidson) won’t think it’ll work. During a chat with Abby (Melissa Ordway), Ashley will reveal her concerns. She’ll surprise Abby by planning to talk this over with Victoria (Amelia Heinle).

Afterward, Jack (Peter Bergman) will share a plan of his own. He’ll mention that Dina (Marla Adams) confirmed Phillip Chancellor (Donnelly Rhodes) is his father. Jack will fill Ashley and Abby in on his mission to exhume Phillip’s body. He’ll eventually admit Jill’s (Jess Walton) blocked him so far, but he’ll refuse to give up.

At Newman, Ashley will show up looking for answers. She’ll push Victoria to share which clients are bailing, but she’ll get the runaround in return. The Young and the Restless spoilers say the ladies will bicker, but they’ll ultimately agree to join forces. Victoria will maintain that J.T. (Thad Luckinbill) isn’t behind the threat, but she’ll be anxious to learn who’s actually to blame.

Meanwhile, Hilary (Mishael Morgan) will have a proposal for Lily (Christel Khalil). She’ll want to help Charlie (Noah Alexander Gerry) and Shauna (Camryn Hamm) come together, but Lily won’t be keen on getting involved. It’ll take some convincing, but Lily will cave in sooner or later.

Hilary and Lily will set up a meeting between the teens. They’ll pretend they had nothing to do with this encounter. Y&R spoilers say Lily and Hilary will argue about the pregnancy, but the conflict will quickly settle down. After Devon (Bryton James) defends Hilary, she’ll assure Lily that she wants to be a real family. Hilary will even admire what great parents Cane (Daniel Goddard) and Lily are.

Devon will be pleased that everyone’s getting on board and making peace. He’ll feel like his dreams are coming true, but The Young and the Restless spoilers hint that miscarriage heartache is looming. In the meantime, Cane will spread the news about Jack’s Chancellor power plays. Devon will be shocked by Jack’s attempt to dig up Phillip’s body.

Once Jack arrives, he’ll get into a fierce argument with Cane. Luckily, Ashley will show up to stop the madness. She’ll drag Jack away and learn about his latest idea. Jack will want to call Dina as a witness in court, but Ashley will express outrage. She’ll think Jack’s no better than Graham (Max Shippee) if he goes that far.

After sneaking off to Crimson Lights, Charlie will promise he doesn’t judge Shauna for her sexual experience. He just doesn’t have any and that freaked him out a bit. They’ll put the drama behind them and declare themselves a real couple.

While Abby plants a kiss on Arturo (Jason Canela), Hilary will have a deep chat with Devon. She’ll be grateful for the way he defended her in front of Lily. However, Devon will note that something’s missing between them. He’ll confess his love for Hilary, so she’ll do the same. The Young and the Restless spoilers say they’ll lock lips and enjoy this sweet moment.

Finally, Ashley will deliver some stunning updates. She’ll track down Victoria and note that J.T.’s credit card was used a motel in Genoa City. A guy matching J.T.’s description was spotted and he just checked out. Ashley will believe J.T. could waltz in Newman any minute now, so she’ll want Victoria to be prepared.

It sounds like Y&R has even more excitement in store. We’ll keep you posted as other details emerge. Stick with the CBS soap and don’t forget to check CDL often for the latest Young and the Restless spoilers, updates, and news.