BY Kinsley Goldman on March 12, 2018 | Comments: one comment
Related : Soap Opera, Spoiler, Television, The Young and the Restless 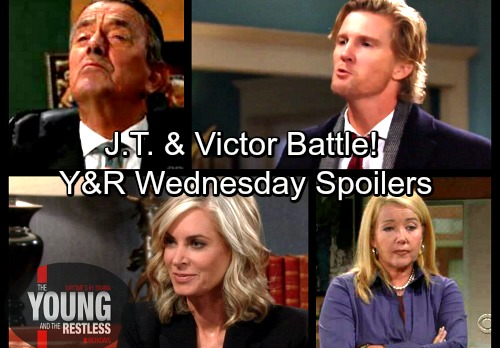 The Young and the Restless (Y&R) spoilers for Wednesday, March 14, tease that Ashley (Eileen Davidson) will make a power play. She’ll want Victor (Eric Braeden), Victoria (Amelia Heinle) and Jack (Peter Bergman) to know she means business. Ashley can’t believe that Victoria and Jack would stoop so low. She’ll doubt Victor’s going toss Victoria out of the company, so she’ll be upset with him as well.

Ashley wants to sue Victor and Jack, so it sounds like she’ll move forward with that plan on Wednesday. If she can’t get Victoria fired, at least she can make Newman Enterprises suffer. Since Ashley has no intention of returning to Jabot, she doesn’t mind taking Jack down, too. Ash will make it clear that she knows how to stand up for herself.

Can Victor and Jack convince Ashley to back off? They’ll certainly have a tough task ahead of them. Victor will also face more drama from J.T. The animosity between them will rev up in Wednesday’s Y&R episode. The Young and the Restless spoilers say J.T will blast Victor for how he’s handing all this. He’ll feel like Victor’s really dropping the ball.

J.T. may try to fix Victoria’s mess in hopes of salvaging his undercover mission. Of course, J.T. was deceived and that makes him look incompetent. He’s supposed to be in the loop as the head of security, but he missed what was happening right under his nose. After J.T.’s next outburst, his job could be on the line. Victor won’t be happy about J.T.’s total lack of respect.

While Victor and J.T. spar, Nikki (Melody Thomas Scott) will realize the jig is up. Someone will become privy to a big secret, so this is probably about Arturo (Jason Canela). The Young and the Restless spoilers say Nick (Joshua Morrow) and Arturo will meet to discuss some projects. When Nikki appears, she’ll find herself in a tricky situation.

Arturo may let something slip about his private time with Nikki. They’ve been enjoying some hot hookups, so Nick may find out about those. His discovery should spark some uncomfortable questions. Nikki may have to rethink her booty calls from now on!