BY Heather Hughes on March 12, 2018 | Comments: one comment
Related : Soap Opera, Spoiler, Television, The Young and the Restless 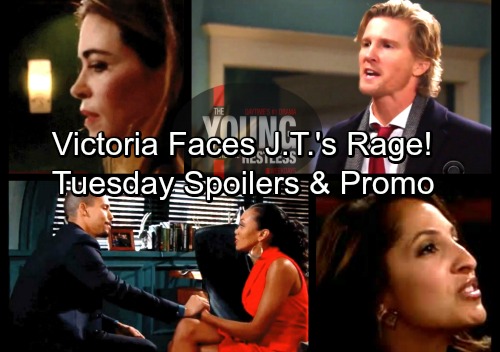 The Young and the Restless (Y&R) spoilers for Tuesday, March 13, tease that J.T. (Thad Luckinbell) will be in denial. He won’t want to accept that Victoria (Amelia Heinle) framed Ashley (Eileen Davidson), but Victor (Eric Braeden) will insist that it’s true. They’ll debate the proof and Victoria’s reasons for going that far.

J.T. will feel like Victoria’s just following the same path she’s seen Victor go down. Of course, Victor won’t take the blame for this. He’ll maintain that they’ve both been betrayed. Meanwhile, Abby (Melissa Ordway) will be hopeful about Victoria’s firing. She’ll offer encouragement to her mother, but Ashley won’t seem certain this going to work out.

At the ranch, Victoria will make a confession. She’ll fill Nikki (Melody Thomas Scott) in on what she did to Ashley, which will lead to some confusion. Nikki just won’t understand why Victoria suddenly has so many insecurities. She’ll point out that Victor may fire Victoria for her shady actions.

Later, Victor will meet up with Victoria and once again offer a lecture. After Victoria apologizes, Victor will suggest that she’ll have to prove herself at the company. They’ll make their way over to the Abbott mansion in hopes of making things right with Ashley.

After Victoria makes a speech about how sorry she is, Ashley won’t be impressed. She’ll feel like Victoria’s just trying to save her own skin. The Young and the Restless spoilers say Victor will throw in some added benefits, but Ashley will stand her ground. She won’t return to Newman Enterprises unless Victoria gets the boot.

Abby will be proud of Ashley for sticking to her guns. She’ll learn Ashley still plans on filing a lawsuit. At the athletic club, Abby will run into J.T. (Thad Luckinbell) and hint that maybe he was in cahoots with Victoria. J.T. will get agitated and snarl that this was all Victoria’s doing.

At home, J.T. will rip into Victoria for deceiving him. She’ll tearfully wonder if J.T. plans to leave her and his response won’t exactly fill her with hope. J.T. will ask Victoria what she thinks before storming out. Back at the ranch, Victor will contemplate his dilemma. He’ll be torn about whether to choose Victoria or Ashley, but Nikki will feel like there might be another solution.

Other Y&R spoilers say Hilary (Mishael Morgan) and Devon (Bryton James) will be excited about their baby-making mission. They’ll discuss their plan until Lily (Christel Khalil) interrupts. Hilary won’t be pleased about Lily’s new office space and position on the board of directors.

Once Michael (Christian LeBlanc) arrives, Devon will want to get down to business. He’ll seek help with negotiating a baby deal. The Young and the Restless spoilers state that Lily will freak when she hears the news. She’ll think Devon’s gone crazy, but he won’t back down.

Lily will return to give Cane (Daniel Goddard) updates on the situation. She’ll vow to put a stop to all this before it’s too late. Back with Devon and Hilary, they’ll reach an agreement on all the baby details. Everything’s moving forward rapidly for “Hevon” and their bundle of joy.

It looks like an exciting episode’s coming up. We’ll keep you posted as other Y&R details emerge. Stick with the CBS soap and don’t forget to check CDL often for the latest Young and the Restless spoilers, updates and news.