The Young and the Restless Spoilers: Mariah and Tessa Kidnap Alice for Answers – Alice Faints Over Creepy ‘Cassie’ Encounter 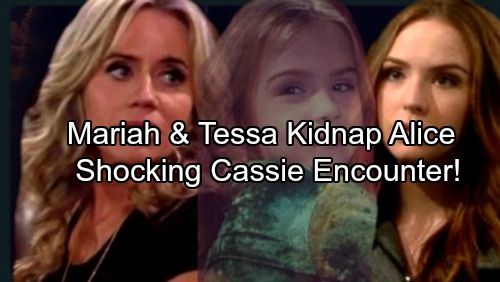 The Young and the Restless (Y&R) spoilers tease that Mariah (Camryn Grimes) will put everything on the line to help Tessa’s (Cait Fairbanks) sister. Crystal (Morgan Obenreder) is still missing and Tessa’s hopes fade each day she’s gone. Mariah just can’t bear to see her friend in so much pain. She’ll decide to risk jail time and her own life to reunite the Porter siblings.

Tessa and Mariah have been to Alice’s (Tamara Clatterbuck) house before, but they walked away empty-handed. Alice refused to let Tessa in or even talk to her for more than a few seconds. Since Alice isn’t going to cooperate voluntarily, that means they’ll have to take drastic action.

The Young and the Restless spoilers state that Mariah and Tessa will head back over there next week. They’ll have a sneak attack in mind for this trip. Mariah may have some second thoughts, but she’ll push past them for Tessa and Crystal. This awful ordeal needs to come to an end ASAP.

After they ring the doorbell, Alice will nervously answer. She’ll wonder who could be looking for and what they might want. When Alice opens the door, she’ll get a huge shock. It appears Mariah and Tessa will place a bag over her head. Alice will try to fight off her kidnappers, but they’ll ultimately get the upper hand.

Y&R spoilers say Alice will be tied up and taken to the ranch stables. Mariah and Tessa will be determined to pry some answers out of her. Unfortunately, they’re forgetting one crucial detail. Mariah looks just like her deceased twin, Cassie (Camryn Grimes). That’ll lead to a double shocker for Alice once the bag is removed.

Alice was Cassie’s adoptive mother when she was a little girl. She has no idea that Mariah exists, so she’ll most likely believe she’s seen a ghost! The Young and the Restless reveal that Alice will faint from the trauma of it all. Mariah and Tessa may not know what they should do next.

Sharon (Sharon Case) will undoubtedly be brought into this at some point. Will she hand Alice over to the police or seek info herself? It sounds like the sex ring storyline is headed in an exciting direction. We’ll give you updates as other Y&R news comes in. Stay tuned to the CBS soap and don’t forget to check CDL often for the latest Young and the Restless spoilers, updates and news.