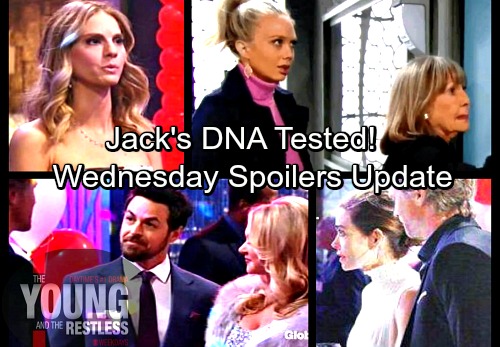 The Young and the Restless (Y&R) spoilers for Wednesday, March 28, tease that Paul (Doug Davidson) will have some bad news for J.T. (Thad Luckinbell). He’ll note that the documents J.T. handed over were fake. They have no real evidence against Victor (Eric Braeden), so Paul will close the case.

J.T. will push Paul to get him another job, but Paul won’t be interested. Since J.T. couldn’t complete this mission, why should he be given a second one? Meanwhile, Abby (Melissa Ordway) will sit with Dina (Marla Adams) at the athletic club. When Dina spots Jill (Jess Walton), she’ll rant about the “hussy” and her awful history.

Abby will realize Jill might be able to shed some light on Dina’s past. Since Dina knows all about Jill, Abby will hope Jill knows all about Dina, too. The Young and the Restless spoilers say Abby will approach Jill and take her back to the Abbott mansion for a chat. Jill will recall all Dina’s flings at the country club many years ago.

Ashley and Abby will be intrigued by the confirmation. However, Ash won’t think it’s enough. They’ll be no closer to the truth about Jack’s (Peter Bergman) paternity. Y&R spoilers state that Abby will push for DNA testing. She’ll suggest that’s the only way they can get to the bottom of all this.

Back at the club, Billy (Jason Thompson) and Phyllis (Gina Tognoni) will have some updates for Raul Guittierez (David Scott Lago) and Brittany Hodges (Lauren Woodland). They’ll admit they’re a couple now, so Brittany will point out that they have a lot to catch up on. Afterward, Brittany will bump into J.T. She’ll hate to hear that he’s getting a divorce from Mac (Kelly Kruger).

At Top of the Tower, the big bash gets underway. The Young and the Restless spoilers say Brittany and Raul will have an announcement to make. They happened to see each other in New York and ended up tying the knot. When Mac appears, J.T. will make his way over and blast her for the custody drama. They’ll bicker until Mac points out that it’s best to just steer clear of each other.

During a conversation with Billy and Phyllis, Mac will allude to having solid reasons for keeping the kids away from J.T. Later, J.T. will start trouble once again. Mac will eventually shout that it’d be better for their children to have no father than to have such a bad one. Billy will summon Victoria in hopes of getting a grip on the situation. When she shows up, Victoria will demand to know what’s going on.

Across town, Ashley will offer Jack a warning. She’ll indicate that Paul isn’t convinced of his innocence. Jack will rant about the voicemail Ashley left for Victor and once again defend himself. He’ll also find out about Abby and Ashley’s interrogation of Jill. Jack will admit that things started going downhill as soon as he brought Dina into that house. He’ll worry that the future will be just as bleak.

Finally, Paul will get Nikki (Melody Thomas Scott) to confess where she was during Victor’s attack. She’ll acknowledge her hookup with Arturo (Jason Canela) and note that she believes Jack’s side of the story. That’ll leave Paul wondering where to turn next in this investigation.

It sounds like plenty of action’s in the works. We’ll keep you posted as other Y&R details emerge. Stick with the CBS soap and don’t forget to check CDL often for the latest Young and the Restless spoilers, updates and news.