The Young and the Restless Spoilers: Wednesday, May 16 – J.T.’s Texts Tell Paul Too Much, Victoria Makes a Confession

BY Heather Hughes on May 14, 2018 | Comments: one comment
Related : Soap Opera, Spoiler, Television, The Young and the Restless 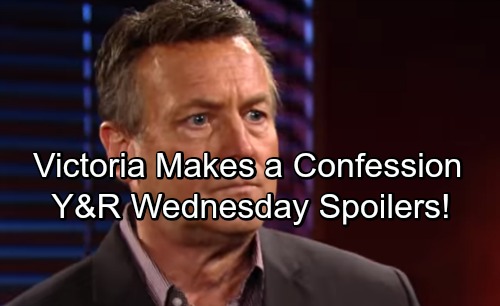 The Young and the Restless (Y&R) spoilers for Wednesday, May 16, tease that Paul (Doug Davidson) will confront Victoria (Amelia Heinle) about the texts on J.T.’s (Thad Luckinbell) phone. Tuesday’s episode puts that phone in the cops’ hands, so Victoria knows there’s going to be trouble. This tricky situation is about to get even trickier.

On Wednesday, Paul will push Victoria to tell him what really happened that night. He’ll point out that Victoria’s version of events doesn’t line up with some of the texts. Paul will think it’s clear that J.T. showed up to see Victoria, so he’ll want to know exactly what went down.

The Young and the Restless spoilers say Victoria will be a big ball of nerves, but she’ll try to give Paul a reasonable explanation. Victoria will realize she can’t tell an outright lie or the whole truth. She’ll opt for something in between and hope it’s enough to get Paul off her back. It’s risky to admit that J.T. was at the house that evening, but it may be what Victoria has to do.

Victoria might admit that J.T. indeed came over. She could fib that she helped him skip town before she knew what he’d done to Victor (Eric Braeden). Victoria could also argue that J.T. threatened to come back and hurt her if she blabbed. There are several ways to wiggle out of trouble, so we’ll see which explanation Victoria goes with. She can’t escape cover-up consequences forever, but this should buy her some time.

Other Y&R spoilers say Jack (Peter Bergman) will sink to the lowest of lows. He’ll throw back more booze and take some pills to ease his pain. The paternity revelation is really taking a toll on Jack’s mental state. He’s spiraling out of control and things are only going to get worse later this week. Jack will crash his car at some point, so that’ll add to his problems.

Elsewhere, Kyle (Michael Mealor) will try to hide his trail. As Abby (Melissa Ordway) grows more determined, Kyle won’t want to be incriminated. He keeps insisting he’s not to blame for altering the footage, but he definitely handed the ammunition to Victor. Kyle will take steps to protect himself and hope that Abby never finds proof.