BY Heather Hughes on November 6, 2018 | Comments: one comment
Related : Soap Opera, Spoiler, Television, The Young and the Restless 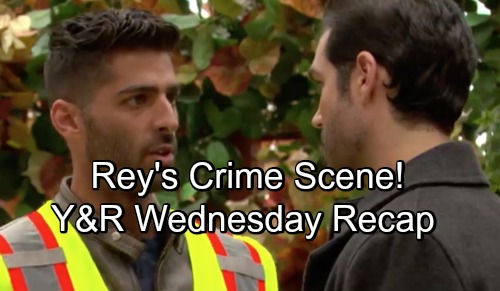 The Young and the Restless (Y&R) spoilers update and recap for Wednesday, November 7, tease that Phyllis (Gina Tognoni) will face more Jack (Peter Bergman) backlash. He’ll still be causing drama over the “Phick” hookup when Billy (Jason Thompson) arrives. Phyllis will choose to get everything out in the open. She’ll admit she slept with Nick (Joshua Morrow) and note that Jack isn’t happy about it.

Billy will suggest they should just do their jobs. He won’t be in the mood to talk about Phyllis’ sex life, but that’s exactly what they’ll do. After Jack exits, Phyllis will insist the sex wasn’t about vengeance. Billy will have a hard time buying that, but Phyllis won’t care what he thinks after what he did with Summer (Hunter King).

At the athletic club, Kyle (Michael Mealor) will bump into Kerry (Alice Hunter). He’ll offer to help her at work, but she won’t feel like he can do much. Kyle will contend that he learned a lot from Ashley (Eileen Davidson), but Kerry will suspect this is all about plotting against Phyllis.

Meanwhile, Summer will bicker with Billy at Crimson Lights. Once their tense chat wraps up, Summer will try to make progress with Kyle. She’ll ask Phyllis to let them team up, so the boss will hand over an assignment. When Kyle gets updates, he’ll be surprised to learn Summer recommended him. Summer will insist he’s the right person for the job, so Kyle will be grateful for the opportunity.

Kyle will want to get started right away, so he’ll decide to cancel his plans with Lola (Sasha Calle). He’ll think she’ll understand since this is such a big deal for him. Something tells us trouble is brewing, so Y&R fans will want to stay tuned.

Back at the club, Sharon (Sharon Case) and Victoria (Amelia Heinle) will mull over the blackmailer’s silence. When talk turns to Rey (Jordi Vilasuso), Victoria will push Sharon to sneak another peek at his files. At the police station, Sharon will spot Rey talking to Mac (Kelly Kruger). She’ll realize J.T.’s (Thad Luckinbill) ex looks upset, so she’ll place an urgent call to Victoria.

As for Mac, she’ll be willing to help Rey in any way she can. Mac will want closure for her kids, so she’ll ask what Rey’s got for her. He’ll show Mac the watch and get confirmation that it was an anniversary gift.

Next, Mac will run into Victoria at the athletic club. She’ll mention the watch discovery and suggest that answers should be coming. Victoria will be on edge, especially after the next revelation. Once Abby (Melissa Ordway) walks in, she’ll let it slip that the watch was found in Chancellor Park.

The Young and the Restless spoilers say Rey will shut down Arturo’s (Jason Canela) project and declare the area a crime scene. It’s clear that more cover-up crew chaos is ahead. Until then, Billy will drop a bomb on Sharon. He’ll point out that Nick and Phyllis are sleeping together again.

Sharon will surprise Billy by remaining calm about the whole thing. She’ll argue that any doubts she might’ve had are long gone. This is proof Sharon made the right call by dumping Nick. Billy will agree that Sharon deserves better, so they’ll stay on their new paths.