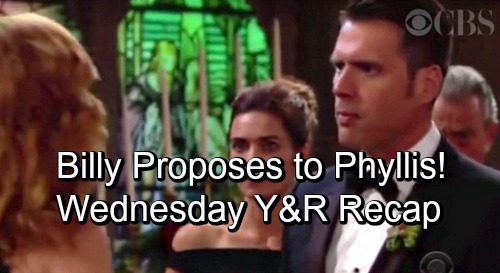 The Young and the Restless (Y&R) spoilers update and recap for Wednesday, October 3, tease that Nick (Joshua Morrow) will confirm his agreement with Phyllis (Gina Tognoni). After learning she brought Billy (Jason Thompson) along, Nick will step away with his hookup partner. They’ll reiterate that they’re going to keep the one-night stand a secret and hope for happy futures.

Meanwhile, Sharon (Sharon Case) will process Mariah’s (Camryn Grimes) confession. She’ll wonder if they can really trust Summer (currently played by Bayley Corman), but Mariah will note that Kyle (Michael Mealor) backed her up. Once Sharon accepts that it’s true, she’ll be upset over the betrayal. Mariah will insist that it was a one-time thing, but Sharon will feel like it’s a pattern with those two.

Y&R spoilers say Sharon will cry as she mulls over Nick and Phyllis’ actions. She’ll wrestle with whether she should dump Nick or trust in his love for her. Sharon will eventually decide to move forward with the wedding. She’ll tell Mariah to act like they never had this conversation, so her maid of honor will do as she’s told.

When Summer arrives, she’ll try to read the room. Sharon and Mariah will pretend everything’s fine, so Summer will assume the secret’s been kept. The Young and the Restless spoilers say Faith (Alyvia Alyn Lind) will join them downstairs. Mariah will warn Summer to keep the hookup under wraps before Sharon sends them all to the church.

At the athletic club, Arturo (Jason Canela) will gawk over Abby’s (Melissa Ordway) wedding ensemble. After Abby brings up the “Shick” nuptials, Arturo will share his negative view of marriage. He just won’t think that’s what makes couples last. However, Arturo will hint that he’s happily falling for Abby.

As the guests arrive for the ceremony, Billy will encounter Victoria (Amelia Heinle). He’ll get defensive when she mentions the latest Jabot drama. Victoria will assure Billy that she just cares about him, so he’ll soften and point out that he’s headed to rehab.

Soon after, Mariah will give Tessa (Cait Fairbanks) updates on her confession. She’ll get nervous since Sharon still hasn’t made an appearance. The minister will start to fret, too. After Mariah’s texts go unanswered, she’ll decide to rush back home and look for the missing bride.

Back with Billy, he’ll drop hints about some “Philly” wedding plans. Phyllis will wonder if that was a proposal, so he’ll admit that it was. After thoroughly checking the cottage, Mariah will dash back to the church. She’ll burst in and inform Nick that she can’t find Sharon anywhere.