The Young and the Restless Spoilers: Week of April 23-27 – Crushing Tragedy, Secrets Exposed and J.T. Rises From The Grave 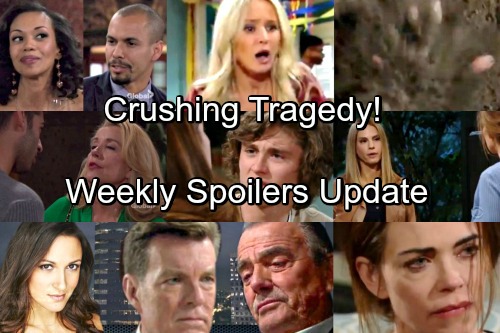 The Young and the Restless (Y&R) spoilers update for the week of April 23-27 tease that some surprises are in store. First, Nikki (Melody Thomas Scott) will catch a glimpse of Arturo (Jason Canela) and Abby (Melissa Ordway) together. She’ll notice they’re acting a bit flirty, so she’ll probably suspect they’d make a good match.

Nikki may be a little jealous a first, but we all know she wants Victor (Eric Braeden) to ditch his mistress. Dumping Arturo would be a good way to nudge him toward that decision. Nikki may break things off and give Abby her blessing later. If she likes Arturo, there’s no reason why she can’t date hm.

Meanwhile, a shocking secret will be revealed. Kyle’s (Michael Mealor) been getting closer to the truth about Dina (Marla Adams). Will he convince her to spill it? Of course, we can’t forget about the other secret-keepers in Genoa City. Victoria (Amelia Heinle), Sharon (Sharon Case), Phyllis (Gina Tognoni) and Nikki are all hiding the truth about J.T. (Thad Luckinbell).

The Young and the Restless spoilers say Sharon’s mind will play tricks on her this week. It looks like she’ll either hallucinate or have a terrible nightmare. Either way, Sharon will be deeply disturbed! She’ll see J.T.’s hand rising out of the soil at his burial spot. Sharon will briefly fear that J.T.’s alive before she realizes it’s all in her head.

Nick (Joshua Morrow) will probably sense that something’s up with Sharon. Will he pry anything out of her? The Young and the Restless spoilers state that Nick will indeed learn a secret this week, but expect some twists to shake things up. Sharon may or may not be the one who ends up filling Nick in.

Across town, we’ll see a Reed (Tristan Lake Leabu) crisis. The Young and the Restless spoilers say Reed will rip into Victor over the J.T. drama. He’ll think Vic’s making stuff up to make J.T. look like a monster. Later, Reed will explode at Victoria as well. She’ll end up admitting at least a few of her problems with J.T.

Victoria will do her best to help Reed get a better grip on the situation. She’ll manage to settle him down, but it won’t be long until Mac (Kelly Kruger) reappears. Y&R spoilers state that Victoria will soon be on the hot seat. Mac will want the real scoop behind J.T.’s disappearance, so we’ll see how much pressure Victoria can take.

Other Young and the Restless spoilers say Hilary will get good news and bad news. She’ll learn she’s pregnant and fill in Devon (Bryton James), but tragedy will strike. It sounds like Hilary will learn she was mistaken or had a miscarriage. Honesty would be the best policy here, but Hilary could be tempted to deceive Devon about this.

Which storylines are you looking forward to in the week ahead? We’ll give you updates as other Y&R details emerge. Stay tuned to the CBS soap and don’t forget to check CDL often for the latest Young and the Restless spoilers, updates, and news.