The Young and the Restless Spoilers: Week of February 19 – Sharon Attacked, Lands in a Coma – Desperate Chelsea Kidnaps Christian 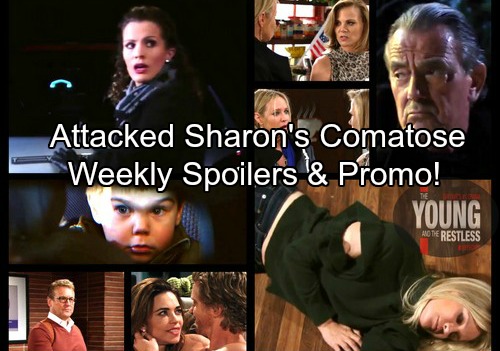 The Young and the Restless (Y&R) spoilers for the week of February 19-23 tease that we’ll see some intense drama. For starters, Sharon (Sharon Case) and Phyllis (Gina Tognoni) will team up. After Sharon learns Christian (Jude and Ozzy McGuigen) is Adam’s (Justin Hartley) son, she’ll be absolutely floored.

Kevin (Greg Rikaart) will reluctantly join their team, too. He may be asked to research Christian’s medical records or score a secret DNA test. Regardless, the plan will work out well until Sharon gets knocked out at Crimson Lights. Will Chelsea deliver the blow? She’s certainly desperate enough to!

The Young and the Restless spoilers say Sharon’s head injury will be quite severe. When Mariah (Camryn Grimes) hears that Sharon’s in the hospital, she’ll rush right over. Unfortunately, the doctor won’t have positive updates. Mariah will be crushed when she finds out Sharon may never wake up. She’ll break down in tears over her mother’s comatose state.

Mariah will beg the doctor to do whatever she can, but it may be up to Sharon. Fortunately, we all know she’s a fighter. Sharon will inevitably wake up from her coma sooner or later. When she does, Chelsea may face major backlash.

In the meantime, it appears Chelsea may kidnap Christian. Y&R’s weekly promo shows Christian in the backseat of a car and Chelsea’s standing by it nervously at one point. She’s come to think of Christian as her own child, so she might try to make a break for it with Christian and Connor (Gunner and Ryder Gadbois).

Of course, Victor’s (Eric Braeden) got eyes and ears everywhere. He’ll probably thwart Chelsea’s getaway scheme before she gets too far. However, it’s actually possible to pull one over on Victor. J.T.’s (Thad Luckinbell) about to offer proof of that.

This week’s preview video shows J.T. saying that he’s right where Paul (Doug Davidson) wants him. J.T. notes that he’s undercover with the Newmans. Naturally, this could pose a huge risk to J.T.’s relationship with Victoria. His feelings seem to be real, but Victoria will have to wonder when the truth ultimately comes out.

For now, J.T. will keep digging for dirt on Victor and his shady employees. We’ll keep you posted as other Y&R details emerge. Stick with the CBS soap and don’t forget to check CDL often for the latest Young and the Restless spoilers, updates and news.