The Young and the Restless Spoilers: Week of January 22 – Noah Discovers Mariah’s Truth – Billy Outraged Over Victoria and J.T. 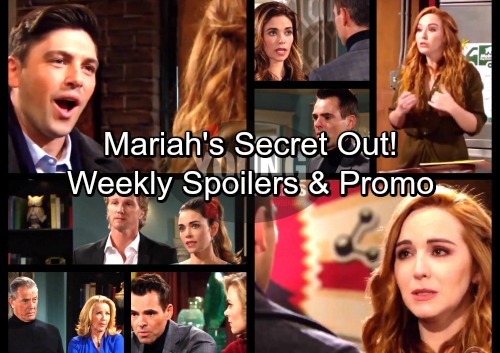 The Young and the Restless (Y&R) spoilers update for the week of January 22-26 tease that some shockers are in store. For starters, the news of J.T. (Thad Luckinbell) and Victoria’s (Amelia Heinle) decision will spread. Nikki (Melody Thomas Scott) and Victor (Eric Braeden) will find out that J.T.’s moving in Victoria’s place. They’ll be taken aback and advise against doing something so hasty.

Victor and Nikki won’t be the only ones who think this is a bad idea. When Billy (Jason Thompson) learns what’s up, he’ll immediately question Victoria’s judgment. Billy will wonder why Victoria would let J.T. back into her life and her home so quickly. He’ll think everything’s moving lightening fast and that could spark some confusion for the kids.

Victoria will contend that everything’s going to be just fine. She’ll admit she feels completely confident in her choice. When J.T.’s by her side, Victoria can’t help but feel hopeful. She’ll urge Billy to get on board and accept that J.T.’s going to be sticking around. They’re both ready to make a serious commitment.

Later, Y&R spoilers say Billy will rant to Phyllis (Gina Tognoni). She’ll note that Billy should just be happy for Victoria or at least be willing to back off. It’s really none of Billy’s business. Nevertheless, Billy will feel like this reunion is a disaster. He’ll hope Victoria will wise up and kick J.T. to the curb soon.

Elsewhere, Hilary (Mishael Morgan) will grow increasingly curious about Mariah’s (Camryn Grimes) behavior. She’ll wonder who Mariah wrote about in her distraught journal entries. Mariah will get agitated when Hilary won’t let up. She’ll insist that there’s no deep, dark secret to uncover.

Of course, Hilary won’t buy that. She’ll hope she can find out what Mariah’s so panicked about. Later, Noah (Robert Adamson) will confront Mariah about her accusations. He’ll think his sister must be mistaken about Tessa’s (Cait Fairbanks) theft.

Mariah will assure Noah that there’s been no mistake. She’ll maintain that Tessa stole her private thoughts and put them in a song for the whole world to hear. When Noah demands to see the journal as proof, Mariah will be hurt. The Young and the Restless spoilers say they’ll have a heated confrontation, but Mariah will eventually soften. She’ll beg Noah not to make her do this.