The Young and the Restless Spoilers: Week of June 11 Update – Fierce Fights, Big Discoveries and an Awkward Newman Father’s Day

BY Marcy Cohen on June 10, 2018 | Comments: one comment
Related : Soap Opera, Spoiler, Television, The Young and the Restless 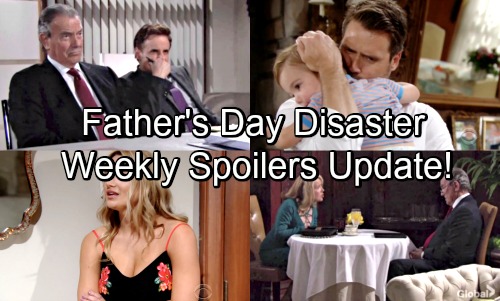 The Young and the Restless (Y&R) spoilers update for the week of June 11-15 tease that some fierce fights are ahead. For starters, Nikki (Melody Thomas Scott) will put Sharon (Sharon Case) in her place. After failing to alter Victor’s (Eric Braeden) plans, Nikki will let Sharon know that it’s out of her hands. Victor will still intend on seeking custody of Christian (Jude and Ozzy McGuigen).

Nikki will make it clear that she didn’t appreciate the blackmail threat. She’ll warn Sharon about following through on her promise. If Victoria (Amelia Heinle) goes down for this and Sharon’s to blame, Nikki will unleash her wrath. Later, Victor and Nick (Joshua Morrow) will have a couple showdowns before the arbitration gets underway. They’ll tell each other that they have no intention of backing off.

The Young and the Restless spoilers say Michael (Christian LeBlanc) will make some strong accusations this week. The arbitration will bring a tirade from Nick, so Brittany (Lauren Woodland) will urge him to sit down and shut up. She can’t do her job if Nick’s sabotaging her every step of the way.

It appears Nick may be left fuming over the outcome. Victor may pull off a win, but Nick will be angry regardless. He can’t believe Victor had the nerve to go through with this. The tension will lead to a difficult Father’s Day this year. Y&R fans can certainly expect an awkward gathering for the Newman clan and a shocker.

Other Young and the Restless spoilers say Summer (Hunter King) will push Billy (Jason Thompson) to his limit. Phyllis (Gina Tognoni) will resist the idea of moving at first, but Billy will keep at it. He’ll grow increasingly uncomfortable thanks to Summer’s skimpy outfits and blatant flirting. Billy will want to get out of this situation before it gets him in big trouble with Summer’s feisty mom!

Elsewhere, Neil’s (Kristoff St. John) efforts will spark a surprising discovery for Jack (Peter Bergman). The Young and the Restless spoilers say Jack will find a shocker in a box of papers. Will he find the name of his potential father or perhaps a city he might be living in now? There’s a good chance Jack will hit some snags in his search, but he’ll keep working toward his goal.

It sounds like some great material’s on the way. We’ll give you updates as other Y&R news comes in. Stay tuned to the CBS soap and don’t forget to check CDL often for the latest Young and the Restless spoilers, updates, and news.