BY Heather Hughes on June 3, 2018 | Comments: one comment
Related : Soap Opera, Spoiler, Television, The Young and the Restless 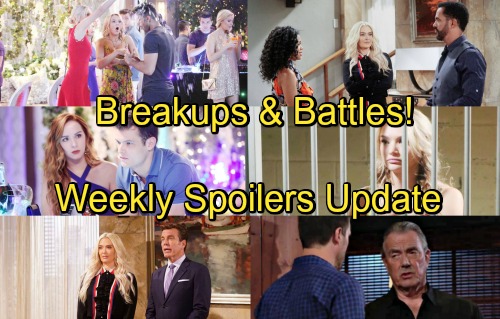 The Young and the Restless (Y&R) spoilers for the week of June 4-8 tease that we’ll see plenty of disasters. First, let’s talk about a doomed party. It certainly won’t turn out to be a fun night for Summer (Hunter King). She’ll be arrested and thrown into lockup before the evening’s over. You can bet Phyllis (Gina Tognoni) and Nick (Joshua Morrow) will lecture their problematic daughter.

Arturo (Jason Canela) won’t exactly have a good time at this bash either. He’ll face Abby’s (Melissa Ordway) fury for keeping her out of the loop on his fling with Nikki (Melody Thomas Scott). The attention Arturo gives Summer won’t help the situation. Nevertheless, Arturo and Abby have clearly fallen for each other. It’ll take some work, but they should conquer their latest obstacles eventually.

Other Young and the Restless spoilers say Lily (Christel Khalil) will see a horrible sight. She’ll spot Shauna (Camryn Hamm) in Charlie’s (Noah Alexander Gerry) bedroom and assume they’ve been having sex. Lily will scold son for moving too fast and sneaking a girl in their house. She’ll rant about Charlie’s poor choices, but she obviously won’t have the whole story.

Charlie might try to take whatever Lily dishes out for Shauna’s sake. However, Shauna will probably come clean and explain her rough home situation. Lily still won’t like the fact that Charlie’s been keeping secrets, but she’ll be glad they weren’t up to naughtiness in Charlie’s bedroom.

Over with Hilary (Mishael Morgan), she’ll be caught off guard by a couple of Devon’s (Bryton James) moves. He may keep Hilary guessing again! Devon will ask Hilary to move in with him, but he may pull back a bit afterward. Perhaps Devon will want to set some boundaries so they don’t rush into anything.

Of course, it doesn’t matter what kind of rules Devon and Hilary put in place. Y&R fans know they’ll be enjoying another sex session before long! Meanwhile, Jack (Peter Bergman) will push Dina (Marla Adams) to reveal more about the past. He’ll get some new hints, but Dina just won’t be able to recall his biological father’s name.

The Young and the Restless spoilers say Victor (Eric Braeden) will also sue Nick (Joshua Morrow) for full custody of his grandson. Out of concern for Nick and Christian (Jude and Ozzy McGuigen), Sharon will break things off. She’ll feel like it’s better to end the relationship before Victor has a chance to use it against Nick.

It sounds like some gripping drama’s ahead. We’ll give you updates as other Y&R news comes in. Stay tuned to the CBS soap and don’t forget to check CDL often for the latest Young and the Restless spoilers, updates, and news.

It’s Summertime in Genoa City next week on #YR! pic.twitter.com/td7oQ4j6Zc

Familiar faces are returning to Genoa City next week on #YR! pic.twitter.com/IKw5i3piSn