The Young and the Restless Spoilers: Week of May 21 – Jack’s Biological Father Shocker – Dina Reveals the Whole Truth

BY Heather Hughes on May 17, 2018 | Comments: 2 comments
Related : Soap Opera, Spoiler, Television, The Young and the Restless 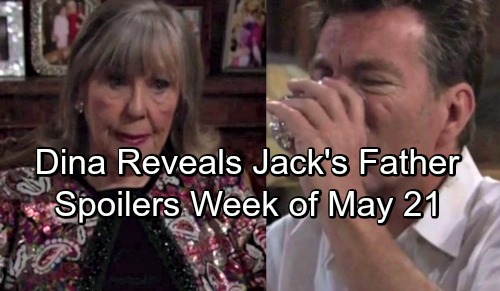 The Young and the Restless (Y&R) spoilers tease that Dina (Marla Adams) will make a shocking statement on a new Y&R episode during the week of May 21-15. Y&R fans know that some big news recently rocked Jack (Peter Bergman) to the core. Thanks to the altered interview footage, Jack learned that he’s not a blood Abbott. He’s been reeling over this identity crisis ever since, but viewers still don’t know the whole story.

Next week, Dina will be ready to explain another crucial part of the past. When she first told Abby (Melissa Ordway) that John (Jerry Douglas) wasn’t Jack’s father, that naturally sparked questions. Abby tried to figure out who Jack’s biological dad might be. She even took Dina to the Stardust Inn as she worked to jog her grandmother’s memory.

Kyle (Michael Mealor) even gave it a shot by pretending to be Dina’s old lover. Unfortunately, Dina just couldn’t remember the man’s name. It seemed like all hope was lost, but things are about to change. The Young and the Restless spoilers hint that Dina will make another confession and it’ll involve the missing piece of the puzzle.

It appears Dina will sit down with Abby again. Ashley (Eileen Davidson) might get in on this chat as well. While Jack continues to mull over this crushing blow, Dina will be busy dropping this bomb. She’ll mention that she never told who Jack’s father was, but it’s time for the truth to come out.

Of course, this situation is a bit tricky. Dina’s memory isn’t the greatest thanks to her Alzheimer’s. She makes stuff up all the time, so it’ll be up to her family to decide what’s fact and what’s fiction. Will Dina finally give them a name they can work with – Y&R spoilers for the week of May 21 say she will. Will it be the truth or a tale created by dementia?

Many Y&R viewers believe Victor (Eric Braeden) and Jack could have the same dad. Could Jack belong to Albert Miller (George Kennedy), too? It’d be a real twist to make them brothers.

There are surely some other names Dina could blurt out though. She might even mention a character that fans have never heard of before. It’d be interesting for Jack to go on this journey and potentially track his biological father down.