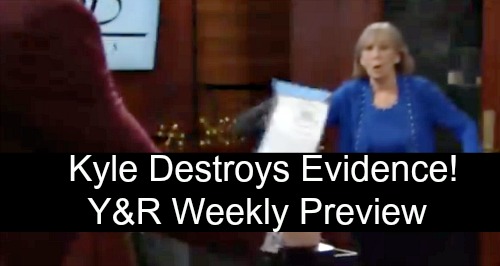 The Young and the Restless (Y&R) spoilers for the week of October 22-26 tease that some stunning moments are on the way. For starters, Cane (Daniel Goddard) will get a shock when he tries to visit Lily (Christel Khalil). A woman in business attire will appear in the prison visiting area. She’ll give Cane the runaround until he finally demands to see his wife.

The lady in front of Cane will insist that it won’t be possible. He’ll naturally want some answers, but he won’t like what he finds out. The Young and the Restless spoilers say Lily will cook up an escape plot this week. Whether it’s for herself or the other inmate she’s been worried about, there’s going to be trouble.

Perhaps Cane can’t see Lily because she’s not there! Then again, Lily could get caught and have visiting privileges revoked for a while. Whatever the case, the Ashby family will be in crisis mode once again. Of course, the Abbott clan will also remain stuck in drama. Traci (Beth Maitland) will declare that she’s just sick about the direction they’re all headed in.

Ashley (Eileen Davidson) will continue to be at odds with Jack (Peter Bergman), so Traci will have to promote peace. It won’t be easy since Ash and Traci haven’t been getting along either. However, Kyle’s (Michael Mealor) discovery will bring even more complications. After Dina (Marla Adams) points him to a safe on Friday, he’ll be ready to destroy the evidence he finds next week.

Dina will catch Kyle trying to put a paper in the shredder, so she’ll stop him in his tracks. She’ll wonder what her grandson thinks he’s doing. In Dina’s mind, she’ll believe this secret is a good thing. Dina will think it’ll help her case with Ashley and make her seem like a decent mother.

Unfortunately, that may not be true if Kyle’s trying to get rid of it. Although he’d have a motive for revenge, Kyle’s softer side could be at work instead. It’s possible his destructive move is out of protection – or at least a desire not to blow up his family any further.

Other Y&R spoilers say Sharon (Sharon Case) will get fed up with Nick (Joshua Morrow). She’ll decide she’s had enough of his meddling, so she’ll give him a fierce warning. Sharon will declare that her friendships aren’t any of Nick’s business. Naturally, she’ll be referring to a specific one. Since Rey (Jordi Vilasuso) is Sharon’s new pal, she’ll want Nick to back off and stay out of her life.