The Young and the Restless Spoilers: Which Y&R Couple Marries Next? 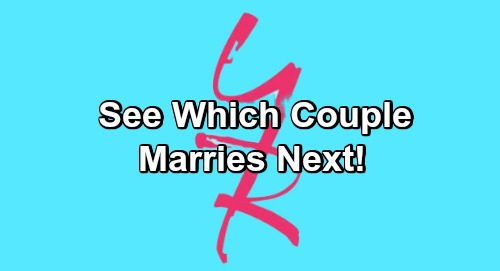 The Young and the Restless spoilers tease that various couples could be married soon. Less hopeful souls might default to saying that none will celebrate nuptials in Genoa City. But choosing to believe in love, let’s say that multiple unions will happen. So, with positivity in mind, which Y&R couple marries first?

Kerry is new in town. She’s just started a high-profile job as Jabot’s lead chemist and is hesitant to jump into any Wisconsin pond. Will she choose to remain focused on her career, or leap when the always romantic and often married Mr. Abbott pops the question in the near future, assuming he does?

Lola (Sasha Calle) cares for Kyle (Michael Mealor). He’s never met a woman like her, as the Summer’s (Hunter King) of the world were his only frame of reference.

Kyle has been patient with Lola’s lack of perceived experience. Hopefully he doesn’t revert to form and connect with some other pretty face before fully exploring what could be the love of his life. But will Lola’s hesitancy mean that marriage is far off for this couple?

Abby’s history with men isn’t great, though Stitch (Sean Carrigan) was a good guy who she married. Claiming that love didn’t exist on her end, which allowed the show to write out Carrigan, the next door opened to Scott (Daniel Hall), who was also written out. Arturo has great promise and is still in GC. Maybe he’ll become the next husband?

This younger Abbott brother cast off Phyllis (Gina Tognoni) awhile ago. He was later open to taking her back, but she didn’t want him. Now, as Christmas arrives, Billy and Vickie are close again. Might they make it to the altar soon?

Speaking of Phyllis, she previously pushed Jack off. Her feelings for Billy do seem to have waned as well. Reverting to Nick (Joshua Morrow) has a lot to do with this change.

Most fans would be hard-pressed to claim that they saw a Phick reunion coming when it started last summer. But it’s here now. Considering Nick’s impulsivity and current circumstances, this couple, of all considered, could elope any day. But will they?

Of course there are other pairings that haven’t been mentioned. Possibly one of them participates in a ringed ceremony first?CDL is a leading source for everything linked to The Young and the Restless. Check back regularly for Y&R spoilers and news!