The Young and the Restless Spoilers: Y&R Alum Max Ehrich Terrified and In Hiding After Obsessed Fan Pulls a Gun 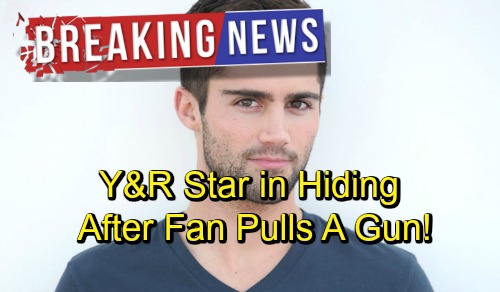 The Young and the Restless (Y&R) spoilers reveal Y&R Alum Max Ehrich who portrayed Fenmore “Fen” Baldwin, the son of Lauren (Tracey E. Bregman) and Michael Baldwin (Christian LeBlanc) has is terrified and rightly so!

Fans of the Y&R star, have noticed his bizarre postings lately, but there hasn’t been much of an explanation, other than him saying he was being stalked. He wouldn’t explain by who, as some voiced their concern and others speculated what was happening.

As CDL reported on October 16, Ehrich said he would be taking a step back from social media for his own safety, even posting photos of security to prove he was serious. Today, we got more of the story…

The Young and the Restless sources explain that while Max Ehrich was out looking at potential new property in Los Angeles, the real estate agent that was showing him around was apparently an obsessed fan. He made apparent sexual advances that Ehrich refused, which infuriated the agent to the point that he pointed a gun at the actor.

At this point, sources are saying it could have been a pellet gun; so be be sure to check back often as we promise to keep you up to date as more details emerge on this story!

Max Ehrich is best known for his portrayal of Fen Baldwin on CBS’ The Young and the Restless from 2012 – 2015, but he has done well for himself also in Primetime shows such as American Princess (Brett Weinbaum), Under the Dome (Hunter May), The Path (Freddie Ridge). Don’t forget to check out his upcoming projects “The Last Breakfast Club” and “Walk. Ride. Rodeo.” as well!