BY Heather Hughes on December 31, 2018 | Comments: one comment
Related : Soap Opera, Spoiler, Television, The Young and the Restless 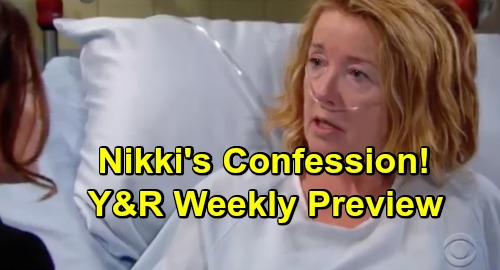 The Young and the Restless (Y&R) spoilers for the week of December 31-January 4 tease that we’ll see even more J.T. Hellstrom (Thad Luckinbill) chaos. Nikki Newman (Melody Thomas Scott) will get Victor Newman (Eric Braeden) off the hook for the kidnapping, but she can’t stop Rey Rosales’ (Jordi Vilasuso) takedown efforts. It’s clear that he wants Victor to pay for J.T.’s murder.

Christine Williams (Lauralee Bell) is always eager to lock Victor up and throw away the key, but she’ll worry about the flimsy evidence. They have some proof against Victor, but is it enough? Christine won’t be certain, but Rey will insist on murder charges right away. He’ll think it’s time to put an end to all this once and for all.

Victor will find himself stuck behind bars while Nikki frets in the hospital. She’ll be distraught as she tells Victoria Newman (Amelia Heinle) her plan.

The Young and the Restless spoilers say Nikki will want to confess. She’ll insist she has to tell the police she killed J.T., but Victoria may not think that’s a good idea. Things could get messy if Nikki admits the truth.

After all, the cover-up crew’s actions certainly don’t make it look like a case of Nikki defending her daughter. They chose to bury J.T. in the park, so Phyllis Summers (Gina Tognoni), Sharon Newman (Sharon Case), Nikki and Victoria could all go down.

Nikki might suggest that she could keep the others out of this, but who’s going to believe she moved the body by herself? They were all at the same party, so Rey would go after them, too. If Rey lands on the right track, there’s no predicting how much evidence he’ll find.

Victoria may think they should roll the dice and see what happens with Victor. Since the proof isn’t all that strong, Victoria may argue that Victor can beat the charges. Of course, Victoria will also navigate her tricky love life this week.

Victoria will keep that smooch with Cane a secret and Y&R fans know secrets always spell trouble! It’ll definitely complicate her rekindled romance with Billy down the road.

In the meantime, Kyle Abbott (Michael Mealor) will face his own romantic woes. He witnessed a New Year’s Eve kiss between Lola Rosales (Sasha Calle) and Fenmore “Fen” Baldwin (Zach Tinker), so he’ll continue to stew over it.

The Young and the Restless spoilers say Kyle will try to win Lola back, but he’ll fail miserably at first. He’ll rev up his rivalry with Fen as well, so major conflict is brewing.

It sounds like some shockers and shakeups are ahead in Genoa City. We’ll give you updates as other Y&R news comes in. Stick with the CBS soap and don’t forget to check CDL often for the latest Young and the Restless spoilers, updates, and news.