BY Sean O'Brien on December 24, 2018 | Comments: one comment
Related : Soap Opera, Spoiler, Television, The Young and the Restless 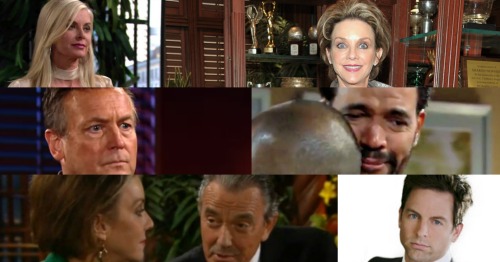 The Young and the Restless spoilers tease that major behind-the-scenes adjustments, shifting to a new executive producer and head writer, creates the potential for realistic cast changes. But what might they be?

Eileen Davidson (Ashley) was fully open about voluntarily choosing to end her latest Y&R run. She offered public gratitude to the now departed executive producer and head writer, Mal Young, for the storyline that led Ashley to Paris and out of the show.

Davidson’s Twitter page has a pin honoring her mother, who has Alzheimer’s, as Dina (Marla Adams) does on the show. Coupling comments about her choice to exit the cast with the above personal matter, it’s natural to believe that the actor wants to devote time to her mother and to pursue other, less time-consuming projects.

Eileen Davidson did not rule out returning at some point in the future. But anything more than occasional drop-ins by Ashley would not seem to be realistic.

Christel Khalil (Lily) voluntarily choose to work on a recurring contract. She was not fired and didn’t make this adjustment from regular status due to any known bad terms with her entertainment employer, as her social media announcement openly acknowledged.

So, Lily is likely to remain incarcerated through September of next year. Based on Khalil’s own words, there’s no realistic reason to believe that her character will be seen more than sporadically until then.

Doug Davidson (Paul) announced in the fall that he was put on recurring status earlier this year in January. Paul’s unexplained absence and his photo’s continued presence in Y&R’s current cast list allows viewers to believe that this character can come back.

Davidson’s recent take to social media, thanking fans for their ongoing support and his own hope to return would indicate that a near-term return of some sort is realistic. Add-in the apparent coming climax to the J.T. (Thad Luckinbill) storyline and it would make sense to write Paul back in.

Like Davidson, Judith Chapman’s (Gloria) photo also still appears on Y&R’s cast list. She’s currently working on ‘Days of our Lives’ and her Genoa City character was replaced by Ted (Sean Muramatsu). As a recurring character and considering the business alliance between Y&R and Days, which can enable coordinated scheduling, Chapman could realistically return at any point.

Also like his two above veteran colleagues, Kristoff St. John’s (Neil) photo appears in Y&R’s cast list. But Neil is said to have moved to be near Lily, due to her incarceration.

St. John was recently married. So, possibly his drop to recurring status was voluntarily as he begins a new chapter in his personal life. Considering his legacy character status, it would seem realistic to see Neil again, but possibly only on occasion and then more regularly near the end of Lily’s sentence.

As for other characters, most especially the often-referenced Adam Newman (as would be played by Michael Muhney, or another recast), well, that’s hard to project in any definitive way. However, information about what would be a mega-cast return will be accessible to all readers on this comprehensive site.