BY Heather Hughes on May 5, 2018 | Comments: Leave Comments
Related : Soap Opera, Spoiler, Television, The Young and the Restless 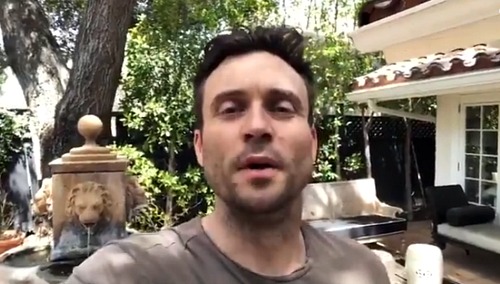 The Young and the Restless (Y&R) spoilers reveal that one CBS soap star is spreading the word. Daniel Goddard (Cane Ashby) is known for his sweet and uplifting social media posts, but this time he had to deliver some bad news. In a video shared across multiple platforms, Goddard alerted everybody to a terrible scam.

Someone’s been impersonating Goddard on Instagram in hopes of scoring money from fooled fans. Unfortunately, the plan has paid off so far. Goddard revealed that people are getting duped and donating to this individual. This person’s asking for $500 to book appearances that’ll never happen. Goddard isn’t involved with this bogus Instagram account all.

Y&R viewers may recall that Goddard broke his arm after a fight scene went horribly wrong. He had to have multiple surgeries and faced plenty of setbacks. As if that ordeal wasn’t painful enough, the scammer’s now exploiting Goddard’s past struggles. He explained that the impersonator’s using pictures from when he was in the hospital. This person’s preying on sympathetic fans to earn cash.

Some Instagram users have been tricked into handing over dough for medical bills. Their compassion is costing them in this case. Goddard decided to put out his own message to set the record straight. “Please do not fall for this,” Goddard said. “This is a scam. If you see this person, they contact you, you see their page…please report them. Don’t give money. I wouldn’t ask you for money.”

Naturally, Goddard’s quite upset over this person’s efforts to swindle Young and the Restless watchers. He didn’t do anything wrong, but he still wanted to apologize to everyone who’s been affected. “I’m sorry this has happened to people,” Goddard said. “It’s horrible. Let’s stop this. Shut these pages down.”

This is obviously an awful situation, but it’s great that Goddard’s taking steps to make it right. He loves his fans and never wants any of them to fall prey to selfish schemes. As for what’s next in Genoa City, The Young and the Restless spoilers say Cane will also tackle a crisis this week. He’ll have to defend Charlie (Noah Alexander Gerry) after Dina’s (Marla Adams) disastrous interview screening.

It sounds like Goddard will continue to deal with drama on screen and off! We’ll give you updates as other Y&R details emerge. Stay tuned to the CBS soap and don’t forget to check CDL often for the latest Young and the Restless spoilers, updates, and news.