The Young and the Restless Spoilers: Y&R Star Asks For Prayers After Terrible Accident 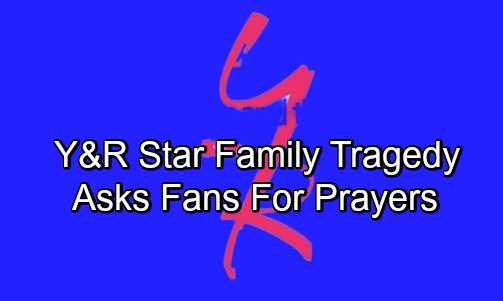 The Young and the Restless spoilers has some sad news to pass along about someone very close to a popular Y&R star. Daniel Goddard, who portrays Cane Ashby on the CBS soap, recently posted a photograph and message on Instagram, Twitter, and his Facebook page about his elderly father’s recent fall.

Daniel posted a photo of his father in a hospital bed with multiple bruises to his face and arms from the fall. The message reads: “My dad had a really bad fall and is in the hospital…can I please ask you to say a little prayer for him? Thank you so very much.”

Daniel has received an outpouring of support from his many followers on each of his social media accounts. Fans have responded in droves that they’d be praying for his father, and many actually wrote short prayers in response to his message. Others identified with his family’s suffering and responded that they’d had elderly family members take dangerous falls as well.

Daniel is originally from Australia, which is where his parents reside. Just this past August, he visited his parents and celebrated his birthday in Australia. No word on whether Daniel is now traveling back to Australia in wake of his father’s fall.

Daniel frequently posts photos and updates about his work and life, so fans will probably get updates on his father’s condition as time goes on. Perhaps we’ll see some additional photos of his father as he’s recovering and improving.

Daniel has portrayed Cane Ashby on Y&R since 2007. He has also appeared in the feature films Immortally Yours and The Perfect Sleep, and he starred in the TV series BeastMaster from 1999-2002.

Our thoughts and well-wishes are with Daniel’s father and his family. Stay tuned to the CBS soap and don’t forget to check CDL often for the latest Young and the Restless spoilers, updates, and news.

My dad has had a really bad fall and is in the hospital… can I please ask you to say a little prayer for him? 🙏 Thank you so very much. ❤️