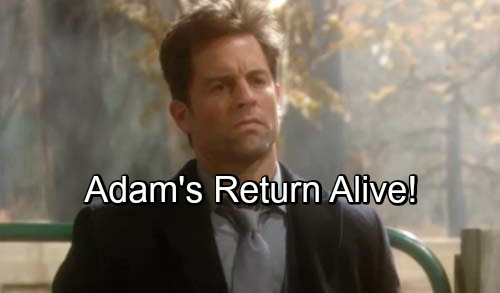 The Young and the Restless (Y&R) spoilers report that Michael Muhney continues to appreciate and endorse fan fervor regarding the possibility of him playing Adam Newman again on Y&R. Muhney most recently took to social media and responded to another call for his comeback by saying, “I’m now officially putting you on the payroll as Adam’s spokeswoman.”

Y&R surprisingly announced Muhney’s departure from its cast five years ago this December, 2018. His last scenes were shown in January 2014. Muhney proved eligible for rehire that summer, but was beaten out by Justin Hartley, who debuted that fall and produced a well-received two-year run.

The internet movie database is a main resource for all things actor in today’s digital world. A glance at Muhney’s page shows that he’s appeared in four roles since leaving Y&R.

Three movies have included the television flick ‘Correcting Christmas’ in 2014. He also appeared in two feature films, ‘The Track’ in 2015, and ‘Search Engines’ in 2016. Last year he appeared in one episode of television’s night time drama ‘The Good Doctor’.

Muhney’s desire to reprise his role as Adam on Y&R make sense. The five-year run he had (2009-2014) was widely revered and came after more than a decade of past efforts. His first acting role came in 1998, when he appeared in the television movie, ‘A Will of Their Own’.

Prior to landing his role on Y&R, Muhney’s longest tenured part (2004-2007) was on television’s night time drama, ‘Veronica Mars’.

Speculation is all that anyone can offer regarding why Y&R hasn’t opted to bring Muhney back. Executive producer and head writer Mal Young, when asked, has noted that the fan’s calls for Adam have been heard and that the character could still be alive.

Hartley’s exit from Y&R’s cast in 2016 preceded his joining television’s night time drama ‘This Is Us’. Breaks in that show’s recording schedule would allow a limited-run comeback by Hartley as Adam, if Y&R and the actor would ever have a mutual interest in pursuing a reunion. However, persistent calls from Y&R’s fans often involve Muhney playing Adam again.

All soap opera fans and all devotees of Hollywoodland know that they can never say never to any possibility. And so, the hope for Muhney’s return as Adam lives on. CDL is a leading source for everything linked to The Young and the Restless – come back to CDL for all your Y&R and other soap news, updates and spoilers!

I’m now officially putting you on the payroll as Adam’s spokeswoman. https://t.co/9H9Wp2fSpI