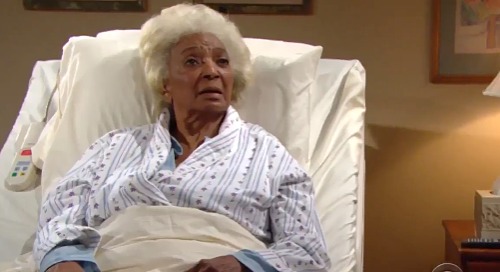 The Young and the Restless spoilers are sorry to announce some bad news concerning a Y&R star. The actress who portrayed Neil Winters (Kristoff St. John) mother Nichelle Nichols (Lucinda Winters) been diagnosed with Dementia.

Nichelle Nichols was last seen on Y&R for a two-episode arc which aired September 1 and September 5, 2016. While Nichols’ appearance on Y&R was quite memorable she is much better known for her tenure on Star Trek, the television series, and motion pictures.

Nichols’ role was one of the first African American female characters on American television not portrayed as a servant. She also worked to recruit diverse astronauts to NASA, including women and ethnic minorities.

Unfortunately, it is highly unlikely that Nichols will return to acting. Her doctor, Meena Makhijani, reports that Nichols has moderate progressive dementia which is characterized by short-term memory loss as well as impairment of a sense of time, place and immediate recall.

Fans of Nichols may have suspected something was awry in May of this year when Nichols’ son Kyle Johnson requested a Los Angeles court to appoint conservators to oversee Nichols’ affairs.

At that the time, he argued Nichols was in need of court-ordered protection to block people from taking advantage of her. In response, the court appointed a team of four fiduciaries to handle her financial affairs.

Dr. Makhijani did say Nichols has no long-term memory loss or problems with verbal comprehension or communication and recognition of familiar people. Nichols did not fight her son’s attempt to get courted protection for her or her assets.

Good wishes can be sent to Nichelle Nichols on her Twitter account @NichelleisUhura. Share your comments below and check back with CDL often for all your The Young and the Restless recaps, spoilers and news