The Young and the Restless Spoilers: Y&R Surprise Couple Swap – Sharon With Billy and Nick With Phyllis? 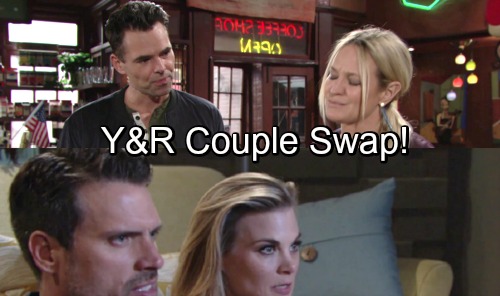 The Young and the Restless spoilers tease that a couple’s swap has become possible in Genoa City. If Sharon (Sharon Case) holds firm, Nick (Joshua Morrow) will not be able to reconcile Shick, as he’d hoped. Instead, she and her almost again husband could be tied to Billy (Jason Thompson) and Phyllis (Gina Tognoni).

Billy is operating in major jerk mode right now. Of course, his critics might say that it’s not a mode, but who he was, is, and will always be. With whatever is true, Billy is looking to get back at Phyllis and Nick.

Using Summer (Hunter King) wasn’t enough for Mr. Abbott. So, why not make a play for the available Sharon, under the guise of commiseration? Well, he just might be doing that right now.

Sharon isn’t into revenge, but she’s previously cavorted with Billy when he looked like Billy Miller. That happened while Case’s character was off her meds a number of soapy years ago. Sharon stabilized herself within the last year and has made many good choices since. She also has Mariah (Camryn Grimes) looking out for her. But her daughter’s concern might not be enough to overcome Billy’s classic charm.

It’s easy to project Sharon winding up with Rey (Jordi Vilasuso). Detective Rosales is sure to somehow solve, or at least handle, the J.T. (Thad Luckinbill) accidental murder, but purposeful burial mystery. After that plays out, it seems likely that Y&R will pair him with Sharon. Why else would she be working at the GC Police Department and also be serving as his landlord, if not to have established a plot path where these characters become Shey, eventually?

In the meantime, Nick and Phyllis have already reconnected. Their past involves more than physical chemistry, as they were married and had Summer. Rebounding into each other’s arms is logical, though somewhat problematic.

Nick is intent on remarrying Sharon. Y&R is keeping the potential of Shick alive by continuing to write Morrow and Case’s characters into many different scenes. And, Sharon’s reasoned removal of Nick from the cottage also included her proclamation of love.

Are you in favor of a Shilly and Phick return? The potential for one couple, or both to form is realistic, but will likely be determined by how Sharon and Nick’s love flows this fall. They are the one-time super couple, whereas Philly’s reign was short.