BY Annemarie LeBlanc on September 25, 2018 | Comments: Leave Comments
Related : Recap, Television, This Is Us, TV 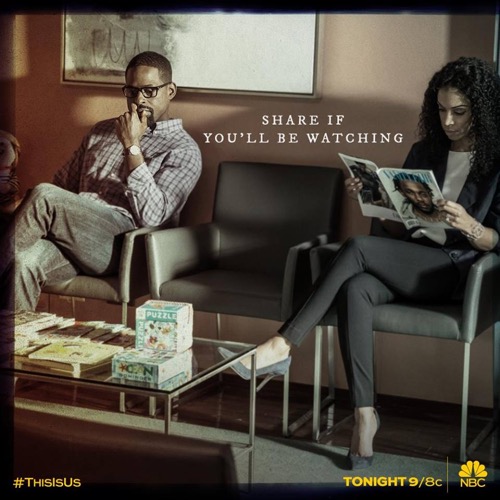 Tonight on NBC their new honest & provocative dramedy series This Is Us airs with an all-new Tuesday, September 25, 2018, episode and we have your This Is Us recap below.  On tonight’s This Is Us season 3 episode 1 premiere, “Nine Bucks,” as per the NBC synopsis, “In the Season 3 premiere, Randall, Kate and Kevin find themselves on new paths as they each celebrate their 38th birthday.”

This Is Us Season 3 begins tonight with a football player calling his mother about how nervous he is about the playing and she talks about him coming home for dinner. Kate (Chrissy Metz) talks to Toby (Chris Sullivan) about making a baby but each month is disappointed that she isn’t pregnant. Her and her new husband Toby visit the doctor, Kate’s tests show she has PCOS which could be linked to her weight and causing fertility problems. Toby is also told he needs to get checked and Kate goes with him.

Deja (Lyric Ross) is caught by Randall (Sterling K. Brown) and Beth (Susan Kelechi Watson) when she smashes the car window at Kate and Toby’s wedding. We fast forward to the end of the summer where she sits with her therapist as they discuss her anger. Shauna (Joy Brunson) shows up to the hearing giving up all parental rights, revealing that Deja’s dad made it very clear he had zero interest in her either; Randall tries to comfort her but she brushes him off, even though the two run together every day, him joking he is wearing out his running shoes keeping up with her. Kevin (Justin Hartley) continues to have a fling with Beth’s cousin, Zoe, and they think they are hiding it from Beth.

Back in the day, Rebecca (Mandy Moore) sings at the bar after the pro football game as Jack (Milo Ventimiglia) watches her from the corner; patrons can’t help but comment how obvious it is that he adores her. After her performance, Jack and Rebecca sit together and run into Miguel (Jon Huertas) outside who only has four bucks and Jack has five, leaving him with “nine bucks!” to go out with Rebecca.

Fast forward, Randall wakes up with a smile, it is his birthday. Deja is sitting on the couch thinking back to her childhood and realizes she didn’t get Randall anything. Randall comes out to the kitchen, Beth gives him a kiss. Randall tells Beth that he is going to have the talk with Deja. Randall heard from Kevin, he requested a gluten-free birthday cake, Zoe makes a comment about Kevin coming over that night and both Beth and Randall look at her strangely. Beth tells Randall that it is official, Zoe and Kevin are having sex. Beth tells him to talk to Kevin, he won’t and he wants Beth to swear on Oprah that she won’t say anything.

Kevin is at work, Zoe calls him and says that Beth knows they are having sex and he has to cancel tonight. Kevin says no way, she has to cancel. The two agree not to do anything to attract each other, they will both be there.

Katie and Toby are visiting the doctor, she tells them that Toby’s antidepressants could be causing the low sperm count. Katie tells her it is her birthday and she feels that the universe intervened. The doctor tells Katie that she can’t take her on as a patient, at her weight, the chances of getting pregnant are very slim, even if she goes through in vitro. Katie tells her they know the risks and they want to do it anyway. The doctor refuses, the risk is too great and her clinic cannot take on the liability.

We go back to Rebecca and Jack’s first real date, he takes her to a Carnaval. Jack buys her a candy apple and a hot chocolate.

Kevin arrives at Randall and Beth’s house, Zoe comes down the stairs and Beth tells them what she knows about them.

Katie and Toby leave the doctor’s office and go to a party for Katie’s birthday.

Randall takes Deja to a building he and Beth bought the previous year, the one where he found his biological father. He tells her that two years ago to the day he knocked on the door to see his father, he wound up having less than a year with him. Randall says that it has defined his life to be adopted, this big giant thing happened and he didn’t have a say in it. Randall tells Deja that they would like to officially adopt her, but they want it to be her choice. Deja tells Randall that he is a very nice person and he has a very nice family, she is grateful but she doesn’t want him to pretend that he is the same as her. She goes on to say that he had two dads that loved him, she had a dad that didn’t want her and mom who left her.

Back to the Carnaval, Jack tells Rebecca about himself, how he just got back from Vietnam; Jack thinks back to being there. Jack tells her that he had a brother but he died in the war. It starts to rain, Rebecca sees a man selling umbrellas for $2 and jack says it is not raining that hard, it is pouring.

Beth and Zoe are shouting, the girls are on the stairs with the girls and they ask him if he is dating Zoe, he says not really, but he was going to ask her to his premiere. Kevin then goes to talk to Beth and she tells him no, to get out of there.

At Katie’s birthday, she makes a wish and blows out the candle on her cake, then she tells everyone that she wished for a baby. Madison tells her that saying your wish out loud means it won’t come true. Katie tells her she is right, it won’t come true because they can’t have children. Then she goes on to say she lost 40 pounds, she has been trapped in her body for so long, tries to stay positive and not to ask herself if her weight is the reason she can not have children. Katie wants to know when the universe is going to give her a damn break.

Randall apologizes to Deja, he says that he planned it for weeks and it was lame of him to compare their situations. Deja tells him that she is sorry that she screwed up his birthday and walks away. Beth comes in, Randall tells her it didn’t go well. Beth then says sorry to Randall about saying something to Kevin and Zoe, then promises to make a donation to Oprah’s foundation.

Deja goes to see her dad at work, she tells him that he is going to miss out on her life and that she has a family that loves her. Deja asks him for one thing and says that he will never have to hear from her again.

At the Carnaval, it is pouring outside – Jack takes Rebecca home. Jack tells her the truth, he couldn’t pay for the umbrella. He goes on to tell her that he has had a hard time since he got back, making money and finding his place, and he doesn’t want to talk about the war or his brother. But, he likes talking to her a lot and never felt that way before. Jack apologizes for the lousy first date, Rebecca agrees it was pretty bad. Rebecca tells Jack that the way he looks at her gets to her, she kisses him and says goodnight.

Beth tells Kevin that he has seen through a romantic relationship in his whole life. He is kind, funny and everyone loves him. Beth says that Zoe will break him, her background is complicated, she eats men up and spits them up, he doesn’t have a chance.

Katie and Toby get home, he tells her there are other ways to have children. Toby says he can slow down his anti-depressants and get his sperm count back up, Katie says no. Katie gets a call from the doctor, she wants them to go back in. They head back in and the doctor tells them that she has spoken to her partners, there is a 90% chance of failure, but if they want to move forward, she will take them on as a patient. Katie is thrilled and hugs the doctor. Toby doesn’t look too thrilled and when he gets home, he flushes his pills down the toilet.

Deja is back home and she has brought a gift for Randall, he tells her that he likes surprises. Deja got him a pair of running shoes, then she tells him that they can sign the papers if they want.

Jack buys Rebecca flowers and shows up at her house only to fnd another guy there with flowers and the guy kisses Rebecca.