BY Bianca on October 16, 2018 | Comments: Leave Comments
Related : Recap, Television, This Is Us, TV 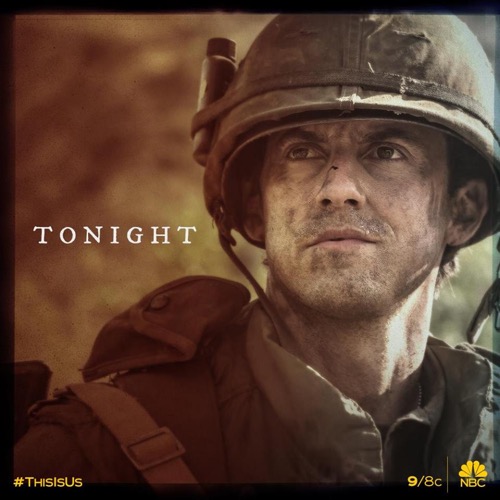 Tonight on NBC their new honest & provocative dramedy series This Is Us airs with an all-new Tuesday, October 16, 2018, episode and we have your This Is Us recap below.  On tonight’s This Is Us season 3 episode 4, “Vietnam,” as per the NBC synopsis, “A young Jack makes a decision that will impact the course of his life.”

This Is Us begins tonight with Jack Pearson (Milo Ventimiglia) arriving in Landing Zone Gloria, Republic of Vietnam, November 1971 where he greets his little brother.

Jack walks with his team, giving orders including Don Robinson (Mo McRae), who insists he is going to play for the NY Giants. Up ahead they find a homemade IED, they all back up as one remains to blow it up. Jack (Sarge) tells them to knock it off as they are tossing around the football, but they call him “Townie” and feel he doesn’t have the arm for it. One tells him to “go deep” suddenly there is an explosion and confusion as they shout out for “Squirrel”. Gun fire erupts and they are surrounded by the enemy.

Robinson runs as Jack says he has him covered; there is yelling that a man is down and Jack finds Robinson with his foot completely blown off. He shouts that he needs a tourniquet as Jack calls out for the rest of their team. Robinson asks Jack to give him his foot and he holds it while Jack tells them to call for a MediVac, he holds a distraught Robinson.

After releasing a red smoke canister, Jack tells him he doesn’t have to wait the 90 days, he is going home now. Jack promises Donnie he will be fine staying the 90 days without him and he isn’t scared, he has done this his whole life. Donnie tells him how his mom told them when they were scared their mom told them to breath when they were scared; the very thing that keeps them alive! He puts his hands on either side of Jack’s face and calmly tells him to just breath – the same thing he always does to his children later in life.

Jack learns him and his men are being sent to a village by Chu Lai, which will be as close to Club Med as they will get. He asks the chopper how often they do deliveries of supplies and says he might have to go for top secret government stuff one time. Jack is told it is a cush detail, but to not take it for granted, as it won’t last forever.

Jack wakes up the men, asking if they think they are on vacation or something. He orders them to back up and tells them to pull themselves together, giving them 2 hours and if any of them makes a move on the crate gets an ass kicking. They are busy fixing the wires around the village when the chopper arrives. Jack asks if he can go to LZ Gloria since he learned his brother is in a bit of trouble under Article 15. When one of the children offers Jack a fish, Townie throws it away, saying he is a Commie and when he turns 15, he will be another one trying to kill them. Once he sees how Jack has been keeping camp, he agrees to let him go see his brother, Nicky (Michael Angarano).

Marilyn Pearson (Laura Niemi) gets a letter and when Jack comes home, he finds his father, Stanley (Peter Onorati) drunk and passed out, in the living room. His mother is crying as Jack reads the letter that reveals he got articled for reckless endangerment to himself and fellow soldiers, complaining that the war is the endangerment, not him. He acknowledges that he isn’t getting out of the war alive.

Jack looks at everything in Nick’s room, thinking long and hard before he goes to see the doctor, saying Nicky always wanted to be a doctor. Jack informs the doctor he wants to enlist and be with Nick, he understands he has an irregular heartbeat but he needs to be where Nick is, even if he can’t get to him – he just needs to be where his little brother is and his only job is to take care of him. The doctor tells him to do 100 push ups before he goes in and catch his breath before he goes in, and they will let him go because no one volunteers to go to Vietnam these days.

Jack is busy working on a car, talking to Nicky, asking if he has a plan. Nicky feels that Jack is his personal Superman and he will always be his Lois Lane, always needing to be saved. Jack says they can watch it at the bar tonight. Jack calls Nicky as their dad is surprised they are not watching the draft lottery at home. Their mom wishes Nick good luck, asking Jack to watch out for Nick as their dad insults him saying, “God forbid, he actually watch out for himself!”

At the bar, Jack encourages Nick to slow down. Jack reminds Nick he was born lucky and they won’t be calling his birthdate. The special report comes on for the draft dates and the fourth number called is Nicky’s and Jack says they can get him out of the country, with a new ID and a place to live; Jack promises everything will be okay. When they return home, their dad stands up and puts his hands on Nick’s shoulders, telling him to make him proud, before he goes upstairs to bed.

Marilyn hugs Nicky and tells him to enjoy his hunting trip with Jack as Stanley watches from the porch. She tells him she loves him as they leave. Nick feels his dad will never speak to him again, but Jack says it isn’t his job to fight their dad’s demons. Nick wonders what happens next and what it would be to look at things in reverse. He says that he can become a medic after training for 2 months in Texas, but Jack reminds him that medics get shot too; he suggests they find a motel and get some rest to cross the border in the morning.

Jack wakes up in the morning to find a note – “Jack, Thanks for always taking care of me. But it’s my turn to save the day now. I love you, Superman. Love CK” – Jack looks out of the hotel and can’t find him.

Jack tells Nick to go long, but he can’t catch it and has a bleeding nose and broken glasses. Jack fixes the glasses, saying their dad will be mad at him, not Nicky and Jack would never let their dad hit him. Nicky says he hates his glasses, but Jack says they are cool, just like superman. He wears them as Clark Kent, a tough guy in disguise, just like Nicky; he is CK, and its just a matter of time before people realize he is Superman!

Later that night, as their parents are fighting Nicky takes off his glasses and orders his dad to leave his mom alone. When Stanley approaches Nicky, saying isn’t this cute; Jack stands in front of him and Stan says the three of them deserve each other. Marilyn hugs Jack and realizes his heart is racing, he admits it always beats fast but he is fine.

Stan is carrying Jack, while Marilyn is in labor with Nicky. Stan kisses her, telling her to just breath, as she has been here before and did great. The nurse tells her that 18 is a lucky number, but Stan wants her to hold out for the 19th. Stan admits to Jack that he would like to have another boy. Stan’s father arrived, asking if there is any news and reveals the names are Nick if it is a boy and Noreen if it is a girl. He pulls out his flask and takes a swig of alcohol right in the waiting room, even offering Stan a drink, who says he knows better than that as Stan doesn’t drink. Stan says if the baby is born after midnight, he will share a birthday with the baby, but his dad leaves not very enthusiastic.

The baby is born 11:58pm on the 18th, and it is a little baby boy, both the nurse and Marilyn feel 18 is a lucky number indeed. Stan tells little Jack that big brothers always look out for little brothers, it is their only job and its the only thing that matters!

Jack arrives at LZ and finds his brother, Nicky, who is shocked to see him in Vietnam.