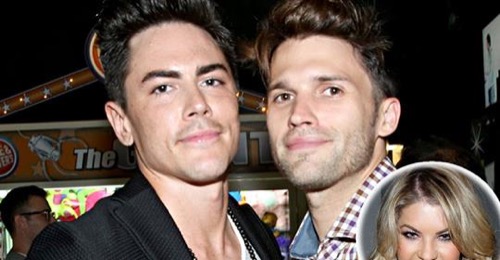 Brittany and Jax come home after they get engaged. Brittany has no idea there is a party waiting inside. They open the door and everyone else surprised. They all celebrate. Lisa is there. She thinks Jax has changed but she would still get the ring checked out. Brittany yells from the balcony that she is engaged.

Back at SUR, James hears about the engagement and comments that the devil got what he wanted. Jax wished his mother would have responded. They haven’t talked since his dad passed. They run off after thanking the guests. They need to go consummate their engagement. Meanwhile, Kristen and Lala talk about how bad James is.

Tom, Scheana, Kristen, and Lala go shopping for SUR’s big Pride party. It is the 80s theme. Jax calls to thank Tom. After, the gang talks about how much Jax has changed and hopefully he stays that way.

Stassi and Kristen are having drinks. Kristen promises she is going after James. Meanwhile, the gang talks about James and how he made comments to Lala’s man. Kristen tells Stassi about Hope and how James cheated on her. Kristen is going to get her revenge at Pride.

Jax visits Lisa at her home. He thanks her for coming by. He asks for this job back at SUR. Lisa recalls how bad Jax was a year earlier. He points out that his dad’s death was a wake-up call. He wants another chance. She offers him bartending duties in the garden at Pride.

Ariana and Tom come to see James and Raquel. They have drinks and dinner and talk about Jax and Brittany. Tom tells him he is being the white Kanye. They agree he needs to get Jax and Brittany a gift.

The next day, the crew comes to work all dressed in their 80s attire for Pride. James has been drinking heavily. He starts rapping. Kristen and Hope slip through the back door. They grab Raquel and bring her to the bathroom. Hope tells her she had sex with James when Raquel slept in the other room. Raquel thinks Kristen is deranged but after they talk more she wonders if what they are saying is true.

Lisa is thrilled over Pride even though he has her running around. Stassi’s boyfriend meets Lisa. Lisa likes him and is glad Stassi is done with her ex.

James apologizes and says hi to Jax and Brittany. He gives them a basket of Patron as a gift. Raquel comes up and tells James how she was ambushed. James tells her they are all jealous and lying. Jax watches the whole thing. He has been there and when he was accused it was usually true. Raquel cries. He tells her let’s go.

Raquel talks to Lala who tells her to wake up. James has been cheating on her. He arrives and Lal tells him to walk away for a minute.

Minutes later, James tracks down Tom S. and tells him it is all a lie. Kristen and Hope come up. They all get into it. Kristen tells James to leave. He calls Katie fat on his way out.