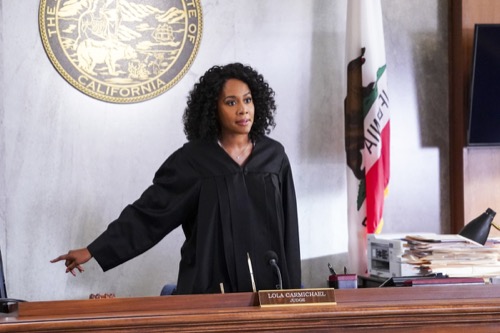 Tonight on CBS their new series All Rise airs with an all-new Monday, September 30, 2019, season 1 episode 2 called,“Long Day’s Journey Into Ice,”and we have your All Rise recap below. On tonight’s All Rise episode as per the CBS synopsis, “When an ICE agent pursues a defendant in Lola’s courtroom, she must fend him off while determining the appropriate sentence for the offender, an undocumented immigrant, whose crime was warning people of a grocery store selling spoiled goods.”

Tonight on All Rise, Emily deals with a fresh breakup and adjusting to being alone. Judge Lola still faces issues getting respect from male judges she works with.

During a trial hearing that judge Lola sits over erupts in chaos as the defendant who is an illegal immigrant is being charged with assault in a supermarket, but pleads his case as to warming customers of expired food in the neighborhood, in the middle of him pleading his case an ICE agent enters and he begins to try to flee running around the court trying not to get caught and Judge Lola stands her ground and dismisses the ICE agent and hold the defendant in holding so he can speak to his lawyer and give him time to avoid being detained.

Lola is left to figure out how she is going to handle this issue. In another trial led by attorney Callan, his witness is being intimidated and brought on the stand as he switches his story causing Callan to lose his case. Emily speaks to her immigrant client and he tells his story on him escaping his country to seek asylum in the U.S. he has been protesting for human rights back home and they tried to silence him so he’s been fleeing since.

Callan losing his case due to his witness being brought upsets him and asks for the defendant a father to be investigated. Back in her chambers Lola and ICE agent Soto go back and forth on taking the defendant into custody, both stating their lawful duty to citizens and to California being a sanctuary state Soto claims he is upholding the law.

Judge Lola warns Soto that if he sets foot in the courtroom she’ll charge him with contempt and he’ll go to jail. Katie who is the Prosecuting DA in the immigrant trail states she is dropping charges by her doing so would set the immigrant free and ICE would be able to detain him, it comes to light that agent Soto may be tampering with the case, knowing the fate of the immigrant judge Lola reminds Katie that she serves the people of California and Katie agrees to continue with the case.

Callan pursues his investigation into his losing case and speaks to the defendant Maia about her father Lambert bribing Callan’s client, she refused to cooperate. Emily’s immigrant client Leo is given a choice of either going to jail or risk being set free and being detained by ICE. Maia calls Callan to speak and tells him the truth that she did steal the car and do the crime.

Callan reveals that he once lied for his father in court when he was younger and it hasn’t been sitting right with him since. Leo decides to plead guilty and serve four years to avoid being detained by ICE, Judge Lola takes matters into her own hands and tries to find a loophole for Leo so that he doesn’t plead guilty and serve four years and isn’t detained by ICE upon his release and they find a lesser violation with lesser time that of 3 months and it would allow him to seek asylum and not alert ICE upon his release.