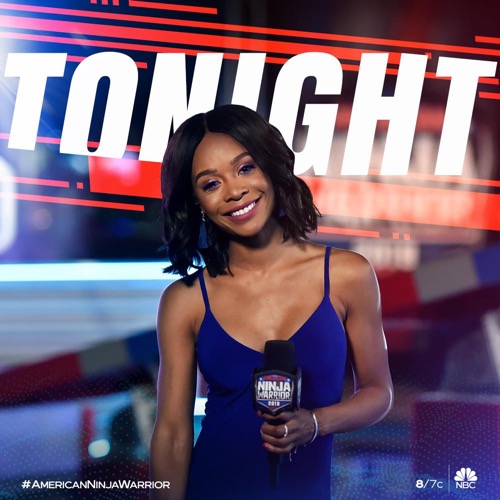 Tonight on NBC their obstacle course competition American Ninja Warrior returns with an all-new Monday, August 26, 2018, episode and we have your American Ninja Warrior recap below! On tonight’s “Las Vegas National Finals Night 1,” season 10 episode 13 as per the NBC synopsis, “Night One of the National Finals in Las Vegas. The season’s top competitors attempt to conquer all four stages of the world’s toughest obstacle course.

Stage one features eight obstacles, including “Roulette Row” and “Diving Boards,” and must be completed in less than 2:30 in order to advance to stage two.”

The National Finals starts now with Night 1! The show has been building to this moment for weeks now. This showed in the obstacle course, which was the longest course yet and it showed in the obstacles. Some of them were new to the ninjas. They haven’t had the chance to prepare on them and so quite a few of them fell unexpectedly. The first was Michelle Warnky. She had a perfect season beforehand because she was one of two women that hit a buzzer during her City Finals and so it was unfortunate she fell on the first obstacle. She just wasn’t able to fully grasp it.

The next ninja to fall was Kevin Bull. He was the ninja with Alopecia and he’s been a great hero for kids with the same condition. They looked towards Kevin to show them what they can do, but he too failed to make it to the end. It wasn’t that much of a surprise because he had near misses in the lead-up to the actual fall and so the fall itself wasn’t too bad. It was for Kevin; it just wasn’t for everyone else. The next fall had been Flip Rodriguez. He was a rarity because he had a Safety Pass and tt meant he could try out the course again if he fell.

So, his fall had come with a silver lining. Flip knew he could go again and he was going to. He just needed to rest up because his fall had knocked the wind out of him. It was while he was resting that Danell Leyva had his own run. Danell was an Olympian. He could have been the first Olympian to make it past Stage 1 and so he had put his everything into his run. He saved himself with his core strength. He also was the only person to flip himself back onto the obstacle and so it was almost not fair when he fell. He fell on the last obstacle, too.

Tonight was full of falls. Karter Ohlson fell, Ronald Washington and Sem Garay had his run after the commercial break. He was a wrestler and one of the twenty-two rookies that made it to Stage 1. His manager also drummed up a lot of support from the crowd. They were on the feet cheering for him and he fell before anyone knew it. The crowd suffered a loss with him however they were back to cheering with Nate Burkhalter. He was an experienced ninja and it’s taken him three years to get back to Las Vegas. And this meant he was hungry for a win.

Nate had to rush through the course because the timing was against him, but he went on to become the first finisher of the night and so things were finally looking up for the ninjas. Brett Sims went next. He was running to keep his beard tonight because he has this stupid bet going with Ryan Stratis. The person that makes it the farthest the fastest gets to keep their beard and the other loses their beard based on whatever length the Moustache Ninja decides. So, tonight really wasn’t the night for Brett to fall.

Brett fell on the second obstacle and his bearded partner in the crime will go much later on. But first, Adam Rayl. Rayl was another former gymnast and he was able to hold onto the obstacles through flips and wise decision making. He also took his time when he needed it. Its how he became the second finisher of the night. Barclay Stockett went next and she ran into the honor of her mother. Her mother was battling Bladder Cancer. She was diagnosed at Stage 3 and so she was being put through a grueling schedule.

Barclay didn’t even want to compete this year because she thought she had to stay home with her mother. It had taken her mother to convince her differently and so Barclay was wearing a t-shirt that said Stockett Strong in honor of her mother. She wanted to make mom proud and unfortunately, she didn’t have the ending she was hoping for. She was doing great until that Warped Wall. Barclay had no legs to make it up there and she soon ran out of time. It was a sad ending for her, but it was still one of the best runs in her career.

David Campbell was known as the Godfather. He’s competed in every season of ANW and he made it close to the end when he fell on the last obstacle. Another OG also fell during the commercial break, so Ryan Stratis had them in mind when he made his own run. He stumbled through the course and he almost fell on the same obstacle as last time. He just barely held on and so the rest of the course was a mad rush to the buzzer. He was on the last nine seconds when he became the third finisher of the night. And that was a little too close for comfort.

One ninja became a finisher over the commercial break while several went on to fall. Only none of them had a story like Philip Scott. He was on the spectrum and he suffers from anxiety and OCD as well. He had been a mess during the City Finals and it wasn’t until he completed his run that he gained confidence. Philip was hoping for the same tonight yet it wasn’t meant to be. He fell on the Jumping Spider. He had gotten one leg into position and it was his other leg that failed to grasp the other part of the wall.

Up until he fell, Philip had seemed like a sure thing. His fall had come as a shock and it could have discouraged anyone. Even someone like Najee Najee Richardson had an overall bad season. He even admitted so when he fell on Tire Run. He said he’s been spaced out and that he just wasn’t in the right mindset to take on the course. So, it really wasn’t anyone’s fault. Chris DiGangi had his run next. He was one of the fierce ninjas coming out of Chicago and he was also engaged to one of them. And maybe it was this engagement that changed things for him.

Chris was finally getting his shot at Stage 2 after seven years. He became a finisher and he was joined by several notable ninjas. There were Karson Voiles who had a Safety Pass and didn’t use it for Stage 1, R.J. Roman was also going to Stage 2 for the second year in a row, and lastly, one of the Towers of Power had made it as well. Jesse Labreck wanted to be one of the finishers and so she had her run next. Though unfortunately, her history was working against her. She has this history of falling on the very last obstacle and she did so again tonight despite her fiancé had done better this year.

Travis Rosen had his run next. He was another OG and he broke his ankle the last time he was on Stage 1. He was able to recover, he was even back to his usual self and so he felt now was the time to retire. He wanted one last season before he goes. He also wanted one last comeback as well and so tonight was a special night for him. Everyone thought he would end the night as a finisher and it was with the greatest sadness that he fell. This time it hadn’t been on the Double Dipper and so that showed personal growth. Which still counts, by the way.

Later on, Flip Rodriguez has his second run. He injured himself when he fell the on his first run and so he hobbled his way through the course. And that time, he pressed a buzzer.

The ninja that went last, however, was Daniel Gil. He was another All-Star and he wanted to have the fastest time. Therefore, he sped through this course. The only obstacle that gave him pause was Diving Boards and that’s because he saw how many people fell on it. Daniel still sped through that as well and he became a finisher with the fastest time on the clock.

Let’s see if anyone can beat him on Night 2!