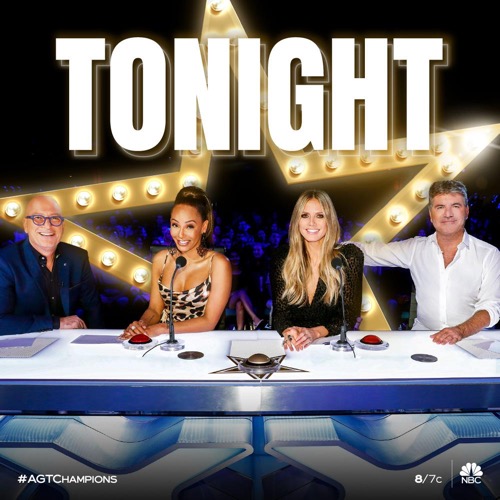 Tonight on NBC America’s Got Talent begins with an all-new Monday, January 28, 2019, episode and we have your America’s Got Talent recap below! On tonight’s AGT season 14 episode 4 “The Champions Four″, as per the NBC synopsis, “The competition continues with 10 more talented acts. Two of these renowned acts will move on to the finals; one will receive a Golden Buzzer, and one will be voted through by a panel of “AGT” Superfans.”

The great and amusing host Terry Crews had three words for everyone tonight. It was “World-Class- Talent”! Ten acts from “Got Talent” shows around the world are coming up for the mother of all talent battles. They were fighting for just two opened spots in the finals and only one will walk away with the likes of a Golden Buzzer. This time it was Simon in charge of that buzzer and he was a tricky one. Simon could be amused with another sort out of there talent, but when it came to his vote and things like one of two spots in the final that’s when he gets serious. He’s looking for someone with genuine talent and stage presence. And he might have gotten lucky with the first contestant who recognized from Britain’s Got Talent.

Issy Simpson was a magician. She was taught by her grandfather and had only been eight years old when she was on Season 11 of Britain’s Got Talent. Unfortunately, she didn’t win her season. She had come in as runner-ups and so now that she was ten she had been hoping to become a GT champion. She was called Harriet Potter because everyone loves her brand of magic and also she was just too cute. Everyone would have laughed even if her tricks hadn’t panned out though luckily they did and so proved to a whole new audience that she was actually quite talented. Issy had everyone fall in love with magic again and that’s such a rare treat that it had been shocking when she hadn’t gotten that special buzzer. If the buzzer had been in anyone else’s hands, she would have certainly have gotten into the finals with it.

The next act had been a singing one. The Texas Tenors was a group of three singers who had been on America’s Got Talent and were told that they would never make it to the finals, but somehow they did. They defeated the odds and they were the runner-ups for their season. They were told back then that they still needed to train and so in the ten years they’ve been away they were out on tour. They were singing and traveling. It even helped them hone their craft and so they gave a much stronger performance tonight than ever before on a GT stage. Only it still wasn’t enough to earn a Golden Buzzer from Simon. Simon was holding on to that one for dear life and he needed to see more before he let it go.

Drew Lynch had been next. He was a comedian and one of the reasons his acts were so great was how he pushed past the pain. Drew had a speech impediment and so he did stutter, but he was also wickedly funny and had gotten the judges all laughing. He didn’t even mind that he lost his season and had come back this year with the man that beat him. Drew actually made fun of the coincidence and had been on a roll. It just hadn’t been enough for Simon. Simon said that he’d seen better performances from Drew and that tonight wasn’t one of his strongest. None of the other judges agreed with Simon and they all tried to speak up for the funny man. He was a great ambassador and was very much talented. No one wanted him wanted anything to take away from that.

Drew lost out to Paul Zerdin and so it was only fair that Paul went next. He was a ventriloquist and since winning he’s turned his own brand of ventriloquism into an art form. He has a Las Vegas show and his professionalism was clear to see, but not all the judges liked his performance tonight. Simon didn’t think it was an improvement over Paul’s past performances and that’s what he’s looking for. He wanted to see someone who has truly upped their game since last time and he didn’t people had done this. Simon let Paul know he was disappointed and Paul had been okay because he said Simon was just honest with him. The other judges had all loved the performance and they too were clear when they said Simon doesn’t know what he’s talking about.

But then they were the Moonlight Brothers. The brothers were actually brothers named Jonathan and Christopher from Denmark. They were a dance act and they went on to win their season of Denmark’s Got Talent however their act tonight had fallen a little flat. They were entertaining and, while they were talented, they weren’t up to the level that the judges were expecting. They thought they would be wowed and instead, they saw a couple of somersaults that looked impressive. This time the judges were all in agreement about not liking this performance and odds are the Moonlight Brothers weren’t going to make it this year. Maybe they’ll try America’s Got Talent next season and that could help prepare them.

The next act had been an infamous one. There wasn’t a person alive that could ever forget Tape Face Boy. He was comedic, but in the traditional sense and so his own unique style of humor was hilarious. He didn’t have that tape over his mouth and so what brought the humor into it was more facial expressions. Tape Face brought several people up onstage and even had Terry strip on live tv. This act had a little of everything and he ended it by giving him the Golden Buzzer. It wasn’t the real one and that meant it could count although it had still been pretty funny and there had been no doubt in Simon’s mind that he was going to see Tape Face Boy again. And so the judge had good luck for the Finals.

Only there was one act that was better than Tape Face Boy. It was Kechi. Kechi was in a nasty accident when she was a kid and she was the only child to walk away from the tragedy. She was left with burns all over her body because of it and the doctors didn’t think she was going to survive or ever live a normal life, but Kechi survived the odds and was just so talented that she left everyone in tears when she sang “You Are the Reason”. It had been such a great performance that Simon said he loved and he gave her the real Golden Buzzer. Simon later told her that she deserved it not because of her scars but because she was extremely talented. He had wanted to press the buzzer for her when she had last been on America’s Got Talent and so he had been honored to be given the chance to fix that this time.

The next act had been slightly disgusting. Stevie Starr who was better known as the Professional Regurgitator was back and his talent was gross. He could swallow anything and bring it back in pristine condition. It was just the idea of regurgitating something that was off-putting. He developed the talent when he was young and would have to hide his lunch money from schoolyard bullies and from there he’s honed his skills. The PR could swallow a tomato and a knife and cut itself inside of his stomach so that when he brought it back up everyone could see his control. It was skill unlike any other and Heidi had admitted that it was also a little gross. She still found something in it to find entertaining and so she took Simon to task for pressing his reject buzzer. It hadn’t been fair to the artist and Heidi didn’t like to discourage people like that.

Brian Justin Crum had been the last act. He was bullied when he was young because he had been overweight and had known that he was gay from an early age. So there had been a lot of people telling him that he was a piece of crap, but Brian found a way to escape through his music. His music has always been his outlet and it did hurt when he came in fourth for Season 11 of America’s Got Talent. He reverted back to thinking he wasn’t enough and with time he was able to leave that mindset. And so he’s back now having learned to define himself and he came in with a strong performance of “Your Song”. It was moving and inspirational. And all four judges had given him a standing ovation because they said that this is the type of songs he should be singing.

And the second person moving to the Finals had been Brian!