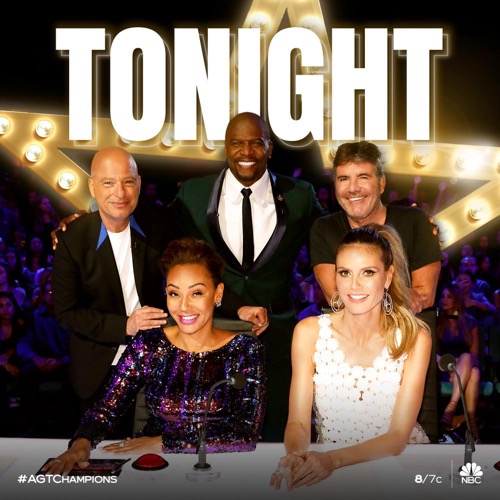 Tonight on NBC America’s Got Talent begins with an all-new Monday, February  04, 2019, episode and we have your America’s Got Talent recap below! On tonight’s AGT season 14 episode 5 “The Champions Four″, as per the NBC synopsis, “The competition continues as 10 more of the most talented, memorable and all-around fan favorite acts from “AGT” and “Got Talent” competitions around the globe perform for judges Simon Cowell, Mel B, Heidi Klum and Howie Mandel. Two of these renowned acts will move on to the finals – one will receive a Golden Buzzer, and one will be voted through by a panel of “AGT” Superfans. “Brooklyn Nine-Nine” star Terry Crews hosts.”

The finals are next week. There are only two spots opened and ten of the very best acts on the planet were competing for it. The first act up was Attraction. The attraction was a shadow dance group who on Britain’s Got Talent. Since their win, the group has been touring around the world and were able to make a living of what they loved to do. It seems the difference between them and other dance groups was the story aspect. Attraction told stories using the shadows they created on the walls with their bodies and so they wanted to tell the story about what they’ve been doing since their win. They went around the Globe, they got married, and they had children. And in telling their story, the audience over here in America got to fall in love with this unique act.

The audience loved them and so did the judges. The others had never seen shadow dancing so precise. The judges heaped ton of praise on Attraction and Simon for one had been happy to see them again. He loved them the first time around and he said that they never disappoint. Simon also wasn’t the only one giddy to see a familiar face. The next act gave Howie a turn. Howie stood up and shouted “OMG” when he saw Jackie Evancho again. She was ten when she first came on the show and sadly she didn’t win her season. Jackie’s now eighteen and she’s back to redeem herself. She sang opera for the world and the judges had all said her voice had only gotten better with time because now Jackie has gotten to know herself.

The next act had been Colin Cloud. He was known as the real-life Sherlock Holmes because he was a mentalist. He could use facial ticks to gain abnormally amount of information on a person and so everyone was left confused when he didn’t even make it to the finals for his season of AGT. It didn’t make sense then and it still didn’t make sense now. Colin had once again shown how skilled he was as a mentalist and David Hasselhoff came to the show just to see him again. Colin was inspiring and everyone loved him, but the act that really got to the audiences and the judges was Lee Ridley. He was a comic that had everyone believing that this year shoed finally going to the guy that brings joy to the room.

Lee Ridley won the most recent “Britain’s Got Talent”. He was known as Lost Voice Guy because he couldn’t personally speak and required a machine to help him do so. Only that didn’t take away from the humor. Lee was downright funny. He also lived with a condition that could have broken him and he didn’t let it. Lee always had a smile and that prim voice he did had made all the jokes seem even funnier. After his set, Simon couldn’t let Lee go without running up onstage to hug him and it was until Simon was gone that the two of the judges admitted that the voice Lee uses actually sounded a lot like Simon.

The next act had been Sal “The Voice” Valentinetti. He was a New Yorker working at his cousin’s pizzeria when he tried out for AGT and came in fifth. It had been disappointing when he didn’t win and so he was back now for that second chance at the title. Sal wanted to beat the best of the best with his Old Hollywood voice. His voice truly belonged in another era and while he lost the first time around he still went on to have a successful career as a musician. He’s been touring and has also released an album.  So again he was really back for that title because he wanted to be an “America’s Got Talent” Winner. He sang another classic song for the crowd this time and had the audience swaying with him as only he could.

Music was having its night with the crowd. The next act was Tokio Myers. He won his season of “Britain’s Got Talent” and he personally impressed Simon when he released his album in an effort to help the victims of the Grenfell Tower fire. It had been a such a devastating disaster for people that Tokio grew up with that he wanted to do something for them and helped them raise thousands of pounds. Tokio has a big heart and even bigger amount of talent. He wowed the audience with his music tonight. And it was so good that Simon begged America to put Tokio through to the finals because not only did he deserve it, but talent like his should be rewarded and nurtured so that it can continue to grow.

The next act had been unexpected. Kseniya Simonova was a Sand Artist and she won her season of “Ukraine’s Got Talent”. She was from a small village originally and then one day she went to the beach and became fascinated by sand. Kseniya fell in love with its movement and began creating art with it. She didn’t think it was something that could be showcased on a show like UGT and so her husband entered her in the competition behind her bar. From, where she showed the world her talent and they came to love it as well as her. She truly creates beautiful images in the sand and it’s not like its just a picture. It was freeform of expression and beauty. And Terry Crews had loved it enough to give her the Golden Buzzer.

The next act had been downright dangerous. Consentino was an Escape Artist. He didn’t win his season of “Australia’s Got Talent”, but he went on to have a career and has toured worldwide. The one area he hasn’t conquered just yet was America. Consentino believes this season of AGT was how he makes a name for himself with this whole new audience and so he decided to do the most dangerous escape. He was tied, strapped, and basically stuck on a spinning wheel that was throwing fire at him. And somehow he kept his calm long enough to escape certain death and even moved the judges who all said this was one of the best dangerous acts they ever saw.

The next act had been the Sons of Serendip. They were classical musicians recreating pop songs and it hadn’t been fair when they didn’t win their season of AGT. It was a wonderful group and some of the judges remembered them from before, but they were so glad to see them again that everyone realized why they loved this group. The group has been touring since they appeared on the show and they’ve only gotten even better with time. So yeah this group was a serious contender but it didn’t necessarily mean they were going to make it to the finals when the overall acts for tonight had been pretty spectacular.

Like the final act. The final act of the night went to Shin Lim. He was a magician with the cards and he again left people questioning how did he do that? He like everyone tonight showed how impressively talented they are and he went the added step of having perfected showmanship. And in time, eventually, it came down to the hard part of having to choose between him and everyone body else for the last spot open.

And America chose Shin Lim because they voted to send him to the Finals!