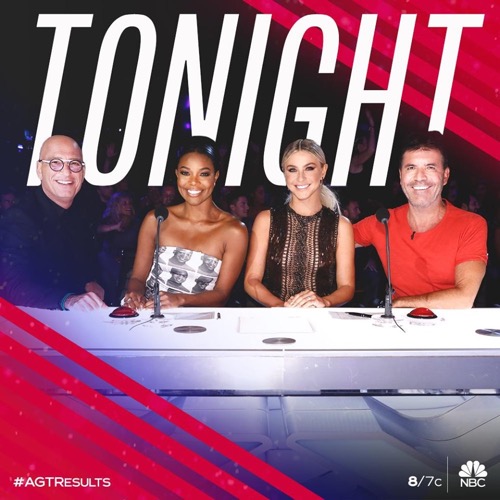 Tonight on NBC America’s Got Talent begins with an all-new Tuesday, August 28, 2019, episode and we have your America’s Got Talent recap below! On tonight’s AGT season 14 episode 16 “Live Results 3″, as per the NBC synopsis, “Seven acts from the previous night’s show will move on to the semi-final round of the competition.

Viewers will have one last chance to send their favorite performer to the next round by participating in the Dunkin’ Save by using America’s Got Talent Official App or going to NBC.com.”

Some dreams died tonight. The contestants have all put on incredible acts and have shown great spirit in doing so, but this was the Live results. This was the moment they realized that either made it or didn’t. It’s not like they didn’t know this was coming. They did and they all put in the effort to make yesterday memorable.
The contestants had a good week to prepare before their performances. They worked on the stage effects. Some even brought in water to uplift their acts and others brought in backup dancers. And Simon was still angry about that Gonzo number.

There’s also plenty of footage that the audience was just now seeing. They saw how much Gabrielle and Julianne really did love Benicio. They hadn’t given him a pity standing ovation and so that came as a surprise to Howie. Howie meanwhile had loved that Gonzo number. He wasn’t merely using it to crack jokes and he did defend it behind the scenes. There was also the part about marmite. Simon’s fellow judges didn’t know what he was talking about before and now they do. They all got to taste marmite and Julianne was the only one that liked it.

It also proved Simon’s whole point. They either hated it or loved it and that’s how it was with the performances as well. The three acts in the bottom were Jackie Fabulous, Lukas & Falco, and Marcin. Anyone of them could be saved with the Dunkin Save. The fans had until the end of the night to vote and they had to do so fast because none of the acts on the chopping block have made sense. Jackie was great yesterday. She was one of the acts that all four judged had loved and so it seemed ridiculous that she was in the bottom.

Marcin’s performance has been ripped some and that didn’t change the fact he was still a rare talent. He should have been safe. He also needed to be saved just as much as Jackie Fabulous and so the one act that everyone could live without were Lukas and Falco. Come on, it was a dog act. There were plenty of them each season and they’ll be plenty more of them next season. Lukas and Falco were cute and everything and that didn’t change their overall standing. But it would be a travesty if they stayed while, others that were better, were eliminated.

This season was just too tough for any nonsense. It’s why the first act that was saved was the Detroit Youth Choir. They had been up against Gonzo and so it really wasn’t a competition for them. Not when those kids earned their place in the competition and Gonzo treated it as a joke. Later, the judges took some time away from the results to read the tweets written about them. They were praised for what said this season and Julianne was ruthlessly mocked for her cabbage Patch Kids’ hair. She hasn’t repeated that look and truly that was a blessing.

Now, back to the results. The next person going through was Emanne. She was the little girl that sings opera and she won out against Berrywam. Her cuteness won out that time. The audience didn’t know much and it turns out his incorporation of sweets had helped Eric Chien to win his round. He had been up against Matthew Richardson and his fellow magician Dom Chambers when he pulled out ahead. Without Eric, it came down to Dom and Matthew and that time it again went to a magician. Dom was his second-go and that was it for Matthew Richardson.

The next round was between Benicio and MacKenzie. They were both singers and the audience sure loved both of them, but this round went to Benicio. His age and his original song gave him the lead at that time. So Gabrielle told him that he shouldn’t change a single thing because America loved him as he was and so did she. Then the Dunkin Save closed. The voting was done and the last-minute win went to Jackie Fabulous. She should have always been put through and so everyone was glad that the Dunkin Save had been put to good use.

The next and final round was between Marcin and Lukas and Falco.

And it was up to the judges!

Julianne may not have voted, but no one doubted she would have said Marcin anyways so congratulations to Marcin!