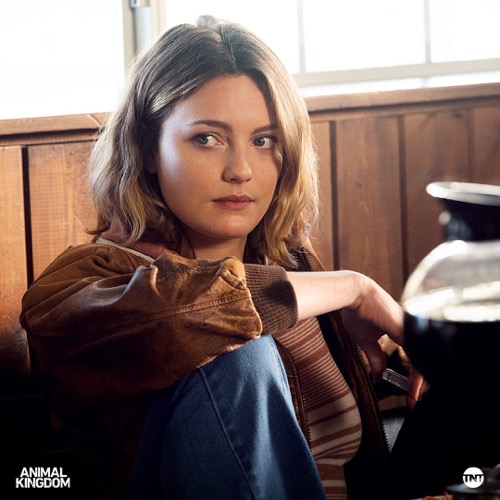 Tonight on TNT Animal Kingdom returns with an all-new Tuesday, July 23, 2019 episode and we have your Animal Kingdom recap below. On tonight’s Animal Kingdom season 4 episode 9 as per the TNT synopsis, “J faces the consequences of his missteps with Mia; Pope worries about Smurf’s disappearance, while Smurf visits someone from her past; Craig grows frustrated with Deran’s secrecy after Deran recruits him for a dangerous assignment.”

Pope finds Angela swimming. She tells him to join her but he can’t with his stomach wound. He dips his feet as they talk about old times and Smurf. She took off and Angela wonders if she will come back. Maybe she doesn’t want them to see her this way.

Adrian and Deran cannot sleep. Adrian knows he is going to jail. Jay texts  Deran. Before he heads to meet him, he tells Adrian he is going to protect him inside if it comes to that.

Jay meets Pope and Deran at the house. Jay tells them that they don’t have to watch their back anymore. He took care of it. Deran gets angry. Maybe those people took Smurf too. Angela watches it all from a window.

Inside the house, Pope tells Deran while they are alone that Smurf has cancer. Deran gets emotional. He wonders if she would just take off and not come back. Craig walks in late and limping.

Smurf visits Jed. It makes her think back to when he introduced her to his brother Odin, telling her he is weird. She met Laney and the kids.

Angela wakes Jay, telling him Pope thinks Smurf took off to kill herself or something. She lies more and tells him she knows about their job.

A young Smurf sits down for dinner with Jed’s brother and his family/ They talk about gold.

Deran and Craig follow Scott to a cop bar. They can’t hit him here. There is no other place, Deran tells him. Craig gathers that this guy must be a cop and freaks out. He gets out of the car. He isn’t helping. He doesn’t want to go to jail.

Angela and Jay are walking and talking. They stop to eat tacos. Angela hesitates. She used to score drugs there. But she can handle it.

Craig is at home when one of Ren’s friends tells him she had to go to the hospital, she was bleeding.

A young Smurf is approached by Jed in the bathroom. He calls her beautiful and wonders what she is doing with his brother.

Pope goes to see Lena. Her adoptive dad shows up and tells Pope to go politely. Meanwhile, Detective Pierce visits Deran at the bar. He wants to talk.If Deran talks about his family maybe he can help out with Adrian.

Craig visits Ren in the hospital. She had a boy, 11 pounds. She tells him that she thinks it is his. Later, when Ren is sleeping the nurse brings the baby in. Craig holds him.

A young Janine shares that she is pregnant. In the present time, Smurf is back home cooking in the kitchen. Pope cannot believe she is back. He told the others she has cancer. She tells him they have a job to do and to get the others here within an hour.