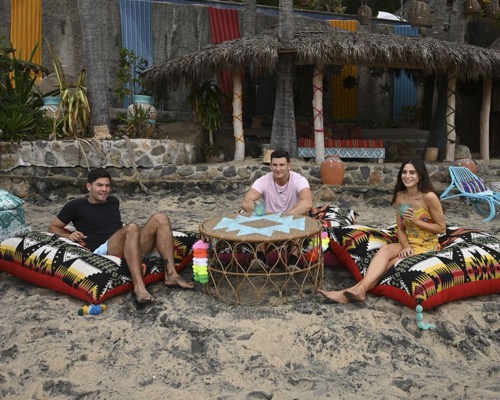 Tonight on ABC after weeks of drama, romance & more Bachelor in Paradise airs an all-new Wednesday, August 6, 2018, episode and we have your Bachelor in Paradise recap below.  On tonight Bachelor in Paradise Season 6 Episode 2 as per the ABC synopsis, “Blake and Kristina may be open to renewing their relationship, but Kristina feels Blake has some explaining to do. And things only get worse for Blake as Caelynn has some choice words for him when he returns from his date.

The next man to get a date card is in seventh heaven over the woman he has asked out, feeling that she could be the one he’s been looking for. But he first must deal with an unexpected visit from a female friend who has something on her mind.”

Onyeka knows that Blake and Christina previously dated and she just doesn’t understand why he hooked with Caelynn one day of being with Kristina. Onyeka thinks he is just a player. Blake tells Tayshia that they are not exclusive and she thinks he is being thoughtful. Caelynn can’t believe that Blake is looking like the King of Paradise after what he did to her and she is sick of it. Caelynn can’t believe that Blake is going on a date with Kristina, how can she not be upset with him.

Blake chose Kristina because even though they dated for a few months, he feels that maybe there is unfinished business with them. Kristina tells Blake that she felt walked over and is giving him a second chance. She goes on to say that finding out that he was with Caelynn was a slap in the face and she deserved more. He says that he was in Stage Coach, things went a little too far, and they both agreed that it was just a one-time thing. She says that he was with her the day before and it was hurtful. Blake is trying to back out of this, he says he respects and he made his bed and will lay in it. Kristina asks him if he changed the sheets. Blake is angry that she did this, it wasn’t how he imagined his date with her. Blake asks her if he has feelings for him. She says the root of her hurt is that he may do it again and not see it as a problem; how many girls has he done this to. They start arguing, he says that he and Caelynn were single adults, and could do what they wanted. He doesn’t feel like he did anything wrong. Neither wants to talk anymore.

Kristina can’t believe that Blake can’t be a man and own up to his actions.

Onyeka and Caelynn talk about how Blake is degrading Caelynn. Blake is back from his date with Kristina. He takes Caelynn to the side and talks to her. She tells him that she feels really disrespected and hurt. She says he is having fun, but she is not and is losing her mind. She says he decided they were going to be friends, she didn’t after they slept together and called her a mistake. Everyone else is listening in, Caelynn goes on to say that Blake treats her like a dirty secret and she is sick of it, she has never in her life been treated like this. Blake says he is so sorry, he didn’t know she felt that way. Blake says he didn’t know she felt that way.

She says that he is having fun and she is not. He begs her to continue talking, she walks away. He says out loud, that he had no idea that she felt that way and he feels so bad. Onyeka tries to comfort Caelynn, she knows Blake is a player and it is not fair that he makes women feel this way.

Demi doesn’t like that Blake has almost slept with all the women already and he is trying to keep it a secret.

Blake tries to confide in Wills, who feels for him but doesn’t feel for him. Blake is so upset over this, he is so confused. Basically, he got caught and doesn’t know what to do about it.

Kristina goes to speak to Tayshia and tells her that Blake hooked up with her, then hooked up with Caelynn when they were together. Tayshia is so confused, there is no way she can trust Blake, he is a huge player. Blake just lost Tayshia, she is not going to deal with games like this.
The next day, Dylan and Hannah are in the pool and he is surprised that thing is going so well for them, he feels really lucky.

Wills goes to speak to Hannah, she says she is finally feeling relaxed there. It doesn’t take long or the two to start kissing and for Dylan to walk up and see it happening. Dylan steals her away. Dylan tells her that he has talked to everyone there and he doesn’t feel like he has a connection with anyone but her. This scares Hannah, she is not sure what her path is going to be in Paradise yet. She tells him that Wills just kissed her and she just wants to be transparent with him. He asks her if she is into him, she says she doesn’t know. He says he gets that the whole point of being there is to meet people (his jaw dropped a bit.) Meanwhile, Wills is thrilled that he kissed Hannah and plans on pursuing her.

Clay is ready to find the person that he is meant to be with. Bibiana is most attracted to Clay and puts herself out there with him. He tells her that she is very attractive, hot. She tells him that he is good looking and says thank you. The two take a walk on the beach and the other girls eye them.

Next Clay is flirting with Nicole.

Demi comes in with a date card – this one is for Clay. Clay says it is his first one on one date in his bachelor career. Bibiana really wants this date, he picks Nicole. Nicole is upset, she thought it would be her, they had real conversations and she is disappointed.

Blake and Nicole leave on their date. Annaliese tells some of the guys that Clay just broke up with Angela and she is really struggling with the breakup. Right before their relationship ended, they were looking at houses together and he said that he wanted to may her. Annaliese doesn’t think Clay is there for the right reasons. She is sick of guys saying one thing and not going through with it.

Annaliese finds Clay and tells him that is in a really awkward position. He says he knows. She says that he is crushing her by being in Paradise. Clay says she is misinformed, she claims that she saw text messages of his. Clay says that he has been done with Angela for months and she should just concentrate on herself. Nicole walks up and takes Clay away for their date. The towhead to a Mexican carnival. They start drinking, bull riding, dancing, and more kissing. Clay opens up to Nicole and tells her about Angela, he says that he is 100% over her. Nicole thanks him for doing that. Nicole loves that he was honest and feels like she can trust him. Fireworks go off and the two hug.

Demi asks Annaliese what is going on because she finds her crying. She tells her it was because of Angela. Demi suggests that maybe next time she does not confront Clay before he has a date, it wasn’t the right moment.

Blake is still upset, he wants to go into hiding. It is going to be hard on everyone in his life when they find out what he did to Caelynn.
Everyone is getting ready for the first Rose Ceremony of the season, and many of the women are very nervous. The men have a lot of big decisions to make. It’s game time.

Chris walks in a greets everyone, he welcomes everyone to Paradise. Chris says the fact is, three women are leaving Paradise tonight. There is work to do, the men need to figure out who they are giving roses to, the women have to try and secure one. Not all girls can get a rose. Demi thinks Blake’s rose is pretty much up for grabs.

Blake is having a rough time, he hears people talking about him and all he wants to do is move past this and move on. Blake takes Tayshia to the side and wants to see if she will give him a chance. She tells him to speak to Caelynn and make it right.

Blake goes to speak to Caelynn and apologizes to her. He is really broken up about it and doesn’t know how he is going to move on.

Jane gives John Paul Jones a spicy taco and he heads down to the beach and vomits. He tries to stop, but can’t. Jane is upset, she has hindered herself. Jean-Paul Jones keeps telling her that he is ok, then he vomits again.

John Paul Jones is ok, something in those tacos made him sick.

Annaliese is excited to spend more time with Chris and only wants a rose from him. Kristina walks up and tries to interrupt them, but Annaliese is confident that she will get the rose. Chris spends some time with Kristina and now is so confused because she is such a breath of fresh air.

Bibiana is a wreck, she feels like she has no connection with anyone. Annaliese goes over to her and tries to soothe her and make her feel better.

Dylan sees Hannah go off with Wills and feels like he is in a tough spot. Little does he know that she is telling Wills that she doesn’t want him to waste his rose on her. Wills is a bit broken up about being rejected. Hannah then goes to speak to Dylan and tells him that she told Wills she was into him and didn’t want him to waste his rose. Dylan is so happy, he really needed that.

Blake walks up to Hannah and asks to speak to her, everyone is watching. Blake tells her that he has a surprise for her and he thinks she is going to love it. Blake really thinks that they have a connection, so he tries to put himself out there. They kiss after she calls him trouble. Hannah goes back to Dylan and tells him what happened. She tells him that she feels like a bad person, but she is just trying to follow her heart.