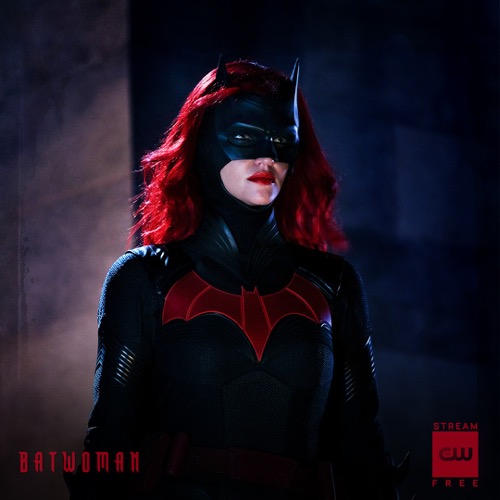 Tonight on the CW the series Batman airs with an all-new Sunday, October 20, 2019, season 1 episode 3 and we have your Batwoman recap below. On tonight’s episode called, “Down Down Down” as per the CW synopsis, “As the city waits impatiently for another visit from who they think is Batman, Alice (Rachel Skarsten) continues to taunt Kate (Ruby Rose) with a secret but also sets her sights on Jacob (Dougray Scott) and Catherine (Elizabeth Anweis).

Kate is visited by Tommy Elliot (guest star Gabriel Mann), a childhood friend of her cousin who has finally realized his lifelong dream of being wealthier than Bruce Wayne and throws a party so all of Gotham can celebrate his success. Mary (Nicole Kang) gets an unexpected new bestie when Sophie (Meagan Tandy) is assigned to protect her.”

Alice is having a nightmare, she is going down into a basement as a little girl, the is a knife on the table, she opens a door and inside there is a box filled with water, she pulls out a mask and screams.

Kate doesn’t know what to do, she has given the city so much hope, they actually think she is batman.

Kate meets Alice on a rooftop, who asks her why she wore the cape – Kate says to protect her from her goons. Alice tells her that she let dad declare her dead. Kate tells her to stop killing people. Alice tells Kate that Beth went far into the rabbit hole and she is never coming back.

Sophie is boxing with her husband, he tells her that she is a little more aggressive than usual. All she can think about is Kate while they are boxing.

Jacob is watching a video of another attack, Alice got away again. Sophie tells him that she thinks she can be helpful and wants his improvement for a special assignment. Meanwhile, the news is saying that the city has been ghosted by batman because there have been no more sightings.

Mary finds out Sophie is her bodyguard.

Tommy in the Wayne Enterprises, Kate finds him and asks what he is doing there. He is there to show Bruce a building he bought, Kate says he is not around but will leave it for him.

There is a disturbing scene in the city, at the Gotham City Gazette there is a mannequin dressed like Batman, to appear looking dead on the steps with fake blood and written on the side of the wall, it reads “Come out, come out, batman.”

Kate writes in her journal, she tried to be batman and drew out his enemies in the process. The Gotham he set out to protect is less safe because of her.

Mary asks Sophie if she can just stay a little further from her, while she is looking for her future husband while she is studying for her med class. Sophie says she has to stay within 10 feet. They start talking about Kate and Sophie asks why she didn’t take the Crowes job, Sophie says she doesn’t know. Mary asks her if she is on this assignment to find about Mary.

Luke is with Kate in the bat cave and showing her what some of the weapons can do. There is only one gun that can penetrate the suit, and it has been stolen. Kate shows Luke an invitation to an event that Tommy dropped off for Bruce. Luke says that if Tommy stole the gun, he is trying to draw out Bruce.

Alice is dressed like security and she is in Jacob’s house. She helps herself to makeup, perfume and then finds a photo on the wall of her dad with Kate and Beth, she takes it down and smashes it on the floor. A security guard comes in and asks what she is doing there, she pulls out a knife and throws it to land on his neck, he falls to the floor.

Kate goes to Tommy’s party, she gets in the elevator with Mary and Sophie. Kate goes to get a beer, and Sophie’s husband is there, he says hi to her and asks how she knows his wife. She gives him some general response. Jacob is there as well, Kate tells him that she doesn’t think that Alice is going to be a problem tonight. Tommy is looking out the window, his building is taller than Bruce’s, he tells Kate that he is finally looking down on Bruce Wayne. Kate tells him about the weapon that was stolen and thank goodness it has a GPS device inside.

Jacob gets a call, it is Alice, she is playing the violin and tells him talk until he stops tracing her call. She goes on to say that she can’t believe that he stopped looking for her, he realizes that she is in his house, she hangs upon him.

Alice finds a box labeled Kate, and there are items in there, maps when they were looking for her.

Jacob tells his wife they have to get out of there, they get Mary and the bodyguards and head to the elevators. Meanwhile, Kate finds Tommy with batman’s weapon that was stolen, she tells him it is over. Tommy grabs her wrist and tells her that she doesn’t want to get involved. Kate reminds Tommy that Bruce was his best friend and saved his mother’s life. Tommy says yes, and took away his inheritance and have to listen to his mother for another thirteen years. Tommy hijacks the elevators, they all stop. He tells Kate to tell batman to meet him on the roof or everyone in the elevators is going to die. To show her that he is not joking, he lets one elevator go with cook staff in it, it falls all the way down to their deaths.

Sophie is in one elevator with her husband and Mary, he asks her why she didn’t tell him that she went to Point Rock with Kate, she says she didn’t know her that well. Jacob and his wife are in another elevator.

Sophie, her husband, and Mary force the doors open and get out.

Kate goes to see Luke, she asks him if he thinks Bruce is coming back, he says no. Kate adds to the journal, that since Bruce is not there and Tommy wants to kill him, she is going to have to kick his ass. But first, she is going, to be honest with the city, she is not batman, she is batwoman. She meets Tommy on the roof, she has changed her appearance, she has long red hair and a red bat painted on her chest. She goes after Tommy and they start to fight. Tommy activates his device and it cuts some cables, her father is in jeopardy, still in the elevator. Kate tries to go help them and Tommy pushes another button that blows out a big hole and Kate grabs on to the edge. Tommy is about to step on her hand when Alice knocks him out of the way and says, “red hair, and I’m the crazy one.”

Kate and Alice are on the roof, she tells her that she saved her life. Kate asks why she saved her, she says because she has plans for her. Kate tells her that if she kills again, she will stop thinking of her as her sister, Alice claims that is what she wants, Kate doesn’t believe her.

Tommy is taken away in handcuffs, he tells Kate that he will be out in an hour. Regan, the bartender, comes down the stairs, she is ok. Kate is there and Regan says she knows that she is into her, Kate promises to call her and Sophie looks on.

Jacob and his wife are home, she is upset that Alice broke in.

Gotham knows now that batman is not back, it’s a new Batwoman in Gotham.