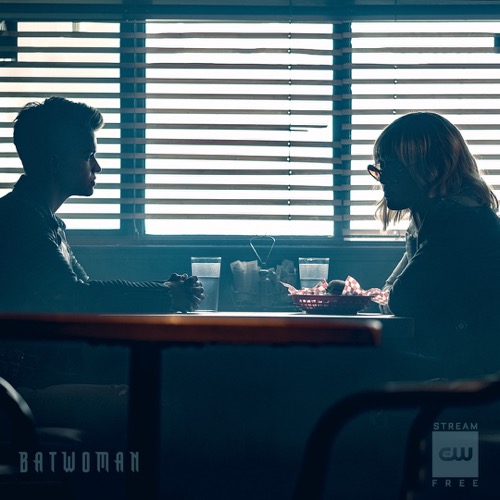 Tonight on the CW the series Batman airs with an all-new Sunday, November 3, 2019, season 1 episode 5 and we have your Batwoman recap below. On tonight’s episode called, “Mine Is a Long and Sad Tale” as per the CW synopsis, “Alice takes Kate down the sad, winding road of her life in the days after the accident as Jacob and Sophie attempt to track them.

Mary has an argument with Catherine, which sends her looking for Kate at Wayne Tower, but instead, she becomes an unwelcome company for Luke.”

Alice takes Kate on a drive and starts talking about her life, and the question comes of why Alice is the way she is – Kate says she has been fifteen years to hear it. Alice says it was the simplest and most frivolous thing she had always done, she woke up. We look back at when Alice was a little girl, a man and his son Johnny found her near the river. Alice just wants her parents; the man says he is going to make her a sandwich. She was watching the boy, he was playing with his toys and it was an ordinary day, but for Alice (Beth) it was the worst day of her life.

Jacob and Sophie found out where Kate is and they are on their way. Meanwhile, Mary asks Catherine if she is covering up for a lab mistake, she says yes, she was trying to give Jacob Kate closure. Mary can’t believe it and tells her to say she didn’t do it. Catherine, can’t because she did. Mary is devastated and walks away.

Alice and Kate stop at a diner, Alice orders a beer, Kate doesn’t want one. Alice tells Kate that she used to dream about running away with her to a place like this. Kate tells Alice she is her sister, and asks where she went – Alice says down the rabbit hole.

Back to when Alice was small, she sees that Johnny has scars on his face. Alice sees on TV a newscast that says they are looking for her. Johnny’s dad says they don’t want her to leave them, he grabs her and drags her down to the basement, locks her in a room. In the room there is the skin of the face, Alice screams. Back to the present day, Alice tells Kate that it was just the first day.

Mary goes to Wayne Tower to look for Kate, she is not there, but Luke is. Luke tells her that he can get a message to Kate, Mary says her mother is the wicked witch of Gotham.

Sophie is in the car with Jacob, she asks him if he is ok, he tells her that he and Catherine are having issues – she paid the DNA analyst saying that the skull that was found belonged to Beth.

Back to the dinner, Kate asks Alice if she was a prisoner, she smiles and says she was friends and it takes on a different meaning, depending on who you ask. We go back to the room that Alice was locked in, the man is with her and he tells her that her son waited a long time for someone like her, this is her new home and she will get used to it. Alice screams out for her dad.

Alice tells Kate that the face was for an experiment for Johnny’s face. The man thought if he could find a way for his son to look normal, he would live happily ever after.

Kate is feeling drowsy, she asks Alice what she did to her.

Mary is with Luke, she keeps talking and he is trying to work. He tries to get rid of her, she tells him that she is going through a family crisis right now. Mary guesses that Kate is with Alice, and can’t believe it.
Alice has Kate chained to a wall – she says she had a friend drug her drink and now the little something special she has planned for Gotham will go along perfectly. She goes back to when she was locked in the room, she found a rusty nail, picked the lock, went up the basement stairs into the kitchen, grabbed a phone and dialed her father, told him to come get her. Johnny’s father caught her and said that if anyone came to save her, he would kill them.

Kate says she remembers the call, Jacob traced it and made his way to the house, he heard noise and runs upstairs to find Johnny. The father claims that Johnny faked Alice’s voice, he has been obsessed with the story since he heard it on the news. Meanwhile, Kate was in the car, she goes into the house, makes her way to the basement, but Alice says nothing because he remembers what she was told, if she says anything, the father will kill everyone.

Kate tells Alice that she was there – Alice says she was waiting for Kate to feel it, sense that her twin was behind the door and she didn’t.

Jacob and Sophie are trying to find Alice and Kate again, finally, he realizes where they are – back at the house where Beth called him after the accident. They pull up to the house, Jacob says he will take the front of the house, Sophie takes the back. Meanwhile, Kate is looking for something, anything so she can pick the lock to get the chains off her wrist.

Alice comes out and says “hi daddy.” He asks where Kate is, she asks him where is Beth. She asks if he thought about where she was when she called him and he didn’t believe it was her voice. Alice is crying, so is Jacob, he goes to touch her face and she stabs him.

Sophie is in the basement, she sees a face in a jar – Johnny is there and he attacks Sophie. Kate frees herself and finds Sophie outside. Jacob tries to crawl away, Alice kicks him and pulls a gun on him. Kate has fun, she has it to Johnny’s head and tells Alice to drop the gun. Alice says she supposes that killing daddy would be no fun at all. Kate agrees Alice and Johnny leave, Kate runs to Jacob and he tells her, Alice is Beth – Kate nods.

Mary is finally going to leave Luke, she tells him if Kate calls she is sorry for everything.

Alice is with Johnny, he has his mask off, he says she didn’t visit him but he felt her in his dreams every night. We look back to the room where Beth was held, Johnny tells her sorry that he tricked her sister and father, and he doesn’t want her to go, he wants to be her friend and keep her company. He slides her a book under the door, it is Alice in Wonderland. Present-day, Johnny hands Alice the book and tells her he can help her escape her pool of tears. They laugh and plan to go after “daddy” together.