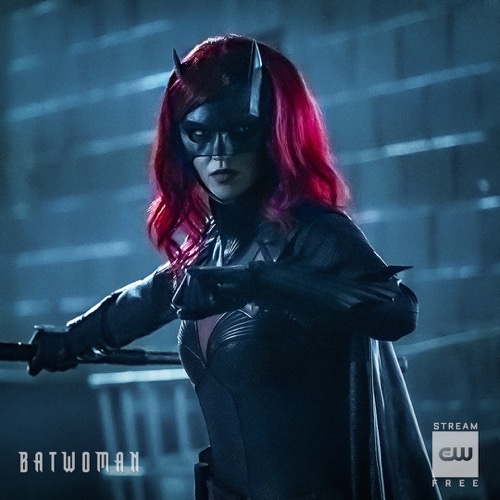 Tonight on the CW the series Batman airs with an all-new Sunday, December 1, 2019, season 1 episode 8 and we have your Batwoman recap below. On tonight’s episode called, “A Mad Tea-Party” as per the CW synopsis, “Kate and Alice continue their sister/nemesis dance, while Alice and Mouse construct their most evil plan yet. Mary invites Kate to a special event honoring Catherine and Jacob makes a decision that leaves Kate perplexed.”

Batwoman stops one of Alice’s thugs and demands to have his jacket because his cell phone is inside and she wants to track Alice. Kate is able to track Alice, she goes to see her. Alice gives Kate gives her the secret weapon that could penetrate Batwoman’s suit. Kate sees a photo of them as children, Alice tells her to take it and be gone.

Jacob is heading home, when he is attacked by more of Alice’s thugs with animal masks, they kidnap him.

Mary invites Kate to a special event honoring Catherine, but she doesn’t want to go. Kate tells her that she wouldn’t betray her dad and go, Mary, lets her know that Jacob is supposed to be going.

Kate goes to see Jacob and asks him if he going to the gala, he says yes. Kate is upset that Jacob is going for Catherine, he says she was trying to help them move on, he understands why she did what she did.

Alice has Jacob hostage, she tells him that they are going to have a daddy/daughter chat. Jacob says Kate will know he is gone, Alice says she won’t – was it Mouse disguised as Jacob who Kate was talking to? Alice pours out her feelings and sadness about being abducted, and how he believed Catherine when she said her remains were found. Jacob tells her that he failed her, she thanks him for saying it, and thanks him for making her who she is today. She tells him that today is the day for her Mad Tea Party, and he will be attending.

Jacob meets with Sophie and Tyler, gives them instructions about the evening, then he shoots the two with some kind of sleeper gun.

Mary is in the limo with Catherine and Jacob, on their way to Catherine’s event.

Mary, Catherine, and Jacob are at the event. Luke is watching, he knows that Jacob is a fake. Catherine is on stage, to receive her award.

Sophie wakes up, then Tyler does. They are in a room that is soundproof, Sophie tells him that Kate was right, Alice is behind this.

Catherine is looking at the teleprompter and all of a sudden, Alice has re-written her speech and it says that there has been a change of plans. The wonderland gang is there, armed and ready. If Catherine doesn’t read, she will die. Then we see Alice, all dressed up, down the isles. Catherine reads, “tonight you honor me as one of Gotham’s heroes, an honor that I bought and paid for quite literally with blood money.

My company makes millions by putting weapons of war in the hands of Gotham’s criminals. My husband rakes in even more, by protecting me from them; quite the scam we have been running. My husband doesn’t want you to know that the true villains of Gotham don’t go by the name Joker, Riddler or Alice. Gotham’s true enemies are right in front of you.” Catherine has trouble breathing, blood drips down her nose, she passes out.

Mary calls 911, then stays with Catherine while Jacob leaves to get medical help.

Inside the hall, doors close and the people are trapped inside – the lights go off and people start to panic. Batwoman is there, she fights through the thugs to make her way up to the door. Meanwhile, Tyler and Sophie are trying to free themselves.

Alice goes to where Mary is nursing her mother. Alice tells Mary that she poisoned Catherine, Mary shouts that if Catherine dies she will kill her. Alice says if she dies it is because of the choices that she made. Alice takes an anecdote out of the purse, it can save Catherine. Alice says that she wants a simple apology for all the pain that she caused her, Catherine apologies and Alice says she doesn’t believe her.

Meanwhile, Batwoman is still fighting her way through the thugs. Catherine tries to get up, she says that she just wanted to take away Kate’s pain, it is all her fault and she is truly sorry. Alice thanks Catherine, then gives her the anecdote. Then, Mary, has blood come from the nose, Alice can’t believe they both drank the champagne – she only has one anecdote. Alice tells Catherine and Mary to choose wisely who will drink the anecdote. Catherine refuses to drink any, she tells Mary to drink it. Mary drinks it and Catherine fades further away.

Batwoman meets up with Alice in the hallway and asks her where is their dad. Alice says that she dreamt of revenge for eleven years. Then Alice tells her how she poisoned Catherine and she brought it on herself. Batwoman starts choking Alice, who just laughs. She finally let’s go, then is hit by the fake Jacob who knocks Batwoman over a balcony.

Catherine is still alive, she is talking to Mary, she tells her that she knew about the clinic. Mary tries to console Catherine as she starts to lose control, Catherine says nothing made her prouder than raising her, then takes her last breath.

Jacob wakes up, he is in his car, he calls Kate; she makes him answer a private question to test that it is really him, when he answers correctly, she tells him that Alice and Mouse are at the gala.

Police arrive and surround Jacob’s vehicle, he is told to put his hands up; he is arrested, they find an explosive in his pocket.
Kate finds Mary wandering around in her clinic, she tells Kate that she couldn’t save Catherine, she died the way Alice planned it, slowly and in pain. Kate wants to give her comfort, but Mary doesn’t want it, she asks Kate if Alice is worth this and walks out.

Sophie finds out that Jacob is arrested, she tells Tyler that this is insane, she can’t believe this. Tyler changes the subject and asks Sophie if she is in love with him, she says she doesn’t know. Tyler tells her to figure herself out, and when she does, maybe he will still be there – he walks away.

Kate is upset, she has lost her family for the second time. Alice was right, Beth is gone. Kate goes to see Jacob in prison, he says when he gets out of there, he is going to put her down once and for all, Kate says she hates her.