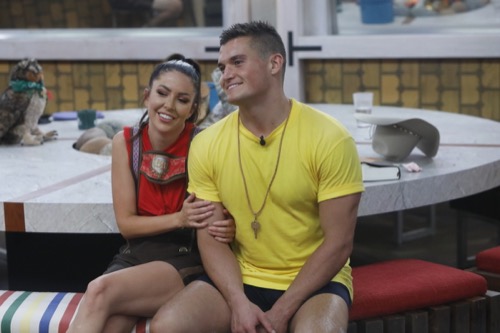 Tonight on CBS Big Brother 21 airs with an all-new Wednesday, August 21, 2019, episode and we have your Big Brother 21 recap below! On tonight’s Big Brother season 21 episode 25 as per the CBS synopsis, “Tonight on BB21 the HoH Jackson will start the HoH competition.  Following the competition we will see if the winner will use it or choose not too.”

Christie is the target this week because Jackson knows that he is her target. Meanwhile, Analyse is ticked off that she is being used as a pawn.

Christie is not shocked to be on the block, but she has a fire under her and is convinced that she is going to win the Veto.

Analyse is not worried, she believes she has a great social game and either way, will not be evicted from the house.

Tommy wants Christie to win the POV and take herself off the block. Unfortunately, he can’t help her anymore because it is going to put a target on his back. Tommy sits down with Jackson, they both agree that they have been loyal to each other. Unfortunately, if Analyse comes off the block, Jackson intents on putting up Tommy as a replacement nominee to guarantee that Christie goes home.

Analyse wants to try to get Christie off the block, she goes to speak to Nick to see where his head is at. She asks him if he will throw the competition to help Christie, but he doesn’t answer. After a few moments, she asks Nick if he is working with Jackson. She then goes to speak to Christie and Tommy and asks them what they think about Nick, they don’t have time to answer because Nick joins the conversation and tells them that if he wins, he is taking Analyse off the block. Christie is furious.

Time for the POV completion. Jackson chooses Cliff. Christie chooses Nick. Analyse chooses Holly. The selections have definitely put stress on the nominees to win the POV themselves.

Christie is in the shower, speaking to Tommy, she says it is stupid, she doesn’t deserve to be on the block and now she honestly can’t wait to be out of the house, nothing is really there. Tommy says that he is real and she can always look at him and see home.

Time for the POV competition, in the background it likes under the sea. Tommy welcomes everyone to BB Scuba Camp. Houseguests have to take their ten ocean creatures and balance them on a structure while wearing flippers and goggles. It all comes down to balance and the houseguests are having a hard time with this competition. Its neck and neck between Jackson and Christie, then all his creatures fall down. Christie tries to focus and keep the momentum, she knows this is her life in the game; Christie’s creatures all fall down. Jackson wins the POV.

Jackson is thrilled to have won POV, he has been wanting to get Christie out for a long time. Tommy and Holly are playing around in the kitchen and Christie is furious, she storms off and leaves the room. She runs to Analyse and tells her what Tommy did, she buries herself in the covers and starts to cry, again. Tommy comes into the room and says sorry to her. Christie says that she is fine. Then she says she can’t believe he was fooling around with Holly when she is going to be sent home. Tommy is sympathetic, but he doesn’t intend on ruining his game for Christie.

Christie has been on could nine for weeks and now she is campaigning to stay in the game. She tries to make a deal with Jackson and Holly, then she cries again. Jackson is so not interested in what she has to say and tells her that she is his biggest threat and that is why she is on the block. Jackson respects the effort she is making, but he owes her nothing.

Time for the POV meeting. Jackson has the power to veto one of the nominations, but he chooses not to use the POV.