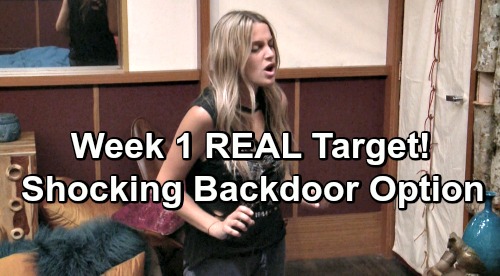 Big Brother 21 (BB21) spoilers tease that the game is in full swing as the houseguests are prepared to duke it out for the coveted Power of Veto. When the live feeds were turned on last night, we confirmed what we already knew – Christie Murphy is HOH and she put Kathryn Dunn and Cliff Hogg III on the block.

What we didn’t know is that neither nominee is Christie’s target. She hopes they take themselves off the block. During the feed leak, it sounded like Christie was targeting Kathryn as she called her paranoid. She pointed out she had asked if they were “plotting against her.” However, that seems to be taken out of context because she flipped it to a new target.

The plan so far is for Kathryn or Cliff to win the competition so they can remove themselves off the block. Christie has promised the nominees that they are both safe. She has a plan to put Kemi Faknule on the block. The first HOH revealed that she doesn’t trust Kemi and that’s why “she has to go.”

Her plan is not fail-proof though. If someone wins it and refuses to use it, then either Cliff or Kathryn would go home. And in the scenario, it sounds like Kathryn could be in trouble.

Most of the house seems to really like Cliff and they do not want to see him leave so soon. As for Kathryn, it seems many like her too. As a whole, it does seem like most of the house would like to see Kemi leave the house.

The competition will be held later today, and we will know more about how Christie will proceed. And that will all depend on who takes the win in the first POV competition of the summer.

The eviction episode won’t air until Wednesday, July 3. That’s a long time in the BB21 house and, as the BB fandom knows, a lot can happen between now and then.

Do you want Kemi to get backdoored for Week 1 eviction? Don’t forget to come back to CDL later for more Big Brother 21 (BB21) spoilers, news, and live feed updates!

Bella- You think you are going to get chosen? Kemi- I hope not. I dont want the responsibility. Not only would I throw it, but I dont want the initial conversation of “you are still taking me down, right?” #BB21