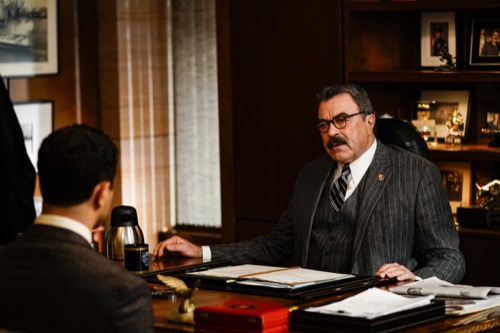 Tonight on CBS their hit drama starring Tom Selleck Blue Bloods airs an all-new Friday, February 8, 2019, episode and we have your Blue Bloods recap below. On tonight’s Blue Blood Season 9 episode 14 “My Brothers Keeper” as per the CBS synopsis, “It’s Reagan versus Reagan when Danny goes against Jamie’s direct order during a hostage negotiation.

Also, Nicky asks Erin for help when her friend is in jeopardy of losing his scholarship because of a crime he didn’t commit, and Frank helps a distraught officer who accidentally shot an innocent girl.”

Nicky calls Erin to a cafe early in the morning for breakfast and introduces to her to a fellow classmate, Billy. He has a problem and Nicky wants Erin to give him advice. His public defender said he could talk about the case with her as long as he trusted her. He was at a bar with some friends, they heard an argument, a bottle breaking and this guy just hit the floor. The police showed up, started asking questions and the next thing he knew he was arrested for felony assault. The cops say they there is a witness, his lawyer is telling him to plead guilty but he did nothing and wrong and if he does that, he will lose his scholarship and have to drop out of school.

A shootout between two officers and drug dealers, a bullet from one of the officer’s guns hit an eleven-year-old girl and it doesn’t look good.

Danny is on the scene of a hostage negotiation, there are three hostages. Jamie updates Danny and tells him to wait for his order. Shots are fired, Frank snuck in and he took care of it defying Jamie’s order. Jamie asks Danny why he didn’t wait for his order, Danny says he had a clear path and it worked, he had a chance to end this thing and there was no time. Jamie is upset, he says that as commander it is his call, not Danny’s call.

Anthony tells Erin that there is a witness that says Nicky’s friend clocked the victim upside the head with a bottle. The victim is in the hospital, their vision could be impaired. Erin doesn’t think he did it, he doesn’t seem like the type. Erin is reluctant to get involved because he is Nicky’s friend but Anthony says the boy deserves justice regardless of who he knows.

Officer Green goes in to see Frank, he is the one who shot the 11-year-old girl, she died. The officer is worried that the media is blaming and tells Frank he didn’t do it on purpose, Frank believes him, says he did his duty. Frank reminds him that the department has resources if he needs them.

Anthony and Erin head to a local college bar to talk to the bartender, JJ. Anthony asks if he says anything the night of the assault, he says no. Anthony says he followed up with all the evidence that was sent over, they are missing the report.

Jamie wrote up Danny for disobeying a direct order. Danny says he saves lives, he didn’t go rogue. Jamie is upset, he is the ranking officer. Danny leaves frustrated.

Garret wants to knock some sense into Jamie and Danny before the complaint goes to Frank.

Erin goes to see Kelly and tells her that they need access to keynotes in Billy’s file and she doesn’t want to go to Frank because it will look like she is trying to undermine him. Erin says she does think that a shared database is a good idea. Kelly tells her she can’t help, they have a right to protect their databases, she is on her own.

Erin goes to see Nicky to update her on Billy’s case and finds the two have clothed.

Jamie is having a drink and Danny walks in. They both got messages that each other wanted to talk. Sid is at the bar, he arranged it and insist the two sit down and have a shot. Sid tells them to work it out, he does not want this to get in the papers and embarrass their father. Sid tells them to shake hands and get over it. Jamie stands up and says he doesn’t want to embarrass his father, he taught him that the chain of command is sacred. Danny says that his old man taught him that saving lives was important.

Kelly goes to see Frank and tells him about Erin’s visit. She tells him that his daughter lost her appetite for arguing with her father.

Nicky visits Erin at the office, she thanks her, the charges were dropped against Billy. She says she shouldn’t have gotten involved with Billy while the case was going on.

Almost time for the family dinner and Jamie still won’t budge. Erin approaches Danny and asks what he is going to do about Jamie. At the table, Danny asks Jamie to pass the meat and he ignores him. They start talking about officer Green, but Jamie and Danny are really talking about what happened between them. Henry tells Jamie and Danny that their argument does not belong at the table and Frank agrees. They start shouting and Frank tells them both to leave if they can’t abide by the rules of the table.

Officer Green is called into Frank’s office, he is going to leave the force, he has made up his mind. Frank reminds him that he has a wife and kids, he says he and his wife live separately. Green says that he is sure that there is life after the NYPD, Frank reminds him that they have great resource but Green just wants out, he appreciates everything that he is done for him, but he is turning in his badge.

Jamie and Danny are outside court, Henry is there, he tells them that they both represent their family. He looks at Danny and tells him that he did the right thing, but he crossed the line doing it. Then he tells Jamie he made the wrong call. He reminds them that they are brothers and to deal with it, he walks away. Danny apologizes to Danny, they talk it out and makeup.

Frank is worried about Green, he goes to visit him at his apartment and finds him with a gun and disheveled. Frank sits down, he tells him that he has a beautiful family. Green says that he has been apart for two months because his wife said that he lived more for his job. Frank tells him that the drug dealers caused that girl getting shot, it is not his fault, he did his job. Frank recounts something similar that happened to him, he had a hard time with it too. Green starts crying, Frank tells him that he is proud of him.

The family is at the dinner table again, Danny and Jamie serve in a super-sized sub to make up for what they did at the table last time, they know they screw up. Frank tells them this is a pretty good start.