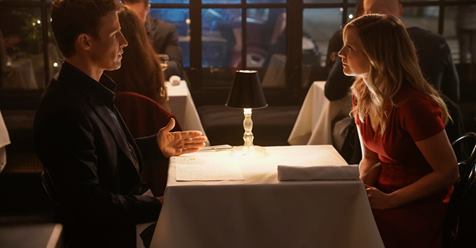 Tonight on CBS their hit drama starring Tom Selleck Blue Bloods airs an all-new Friday, April 5, 2019, episode and we have your Blue Bloods recap below. On tonight’s Blue Blood Season 9 episode 18 “Rectify” as per the CBS synopsis, “Frank considers implementing a more rigorous fitness test after an officer has trouble keeping up with his partner; Danny is hesitant to pursue a cold case after learning who the original detective was; Anthony begs Erin to stall a trial.”

In the snow, Anthony finds Sam locked out of the house; his calls keep going to voicemail and doesn’t want to leave the steps in case his new foster parent comes home. He hands Anthony a ticket stub from the movies the other night. He admits he went to the movies by himself and Ms. Johnson was really good to him, but he doesn’t want her to go to prison. More importantly, he wants to be the first family member to not go to prison and he was willing to lie because he didn’t want to move again. His foster mother calls him over, and he helps her with the groceries.

Danny and Baez arrive to see Sloan with some questions. He immediately knows this is about Caroline, knowing it was her sister who has been “banging on their door”. He admits he tried for years to move on as he lost the love of his life, Caroline. He says he was separated at the time and she meant everything to him; making Baez wonder why he isn’t spending every waking hour trying to find her killer. He gave up hope but finds no idea why her sister feels he is the killer. Sloan says he doesn’t work closely with the NYPD and doesn’t have any friends in the NYPD. Danny hopes they didn’t waste his time and leave.

Garrett shows Frank how the physical tests have improved other forces, but almost 40% of the officers failed the test. Frank feels that is an iceberg as that is about 15,000 cops. Sid returns with a huge book full of names, saying after eyeballing all of these officers it is likely all of them would be out of a job! Sid wants to know if Garrett feels he is better at his job because he lost all the weight, Frank orders them both to cut it out and tells Sid to sit down. He hasn’t made a decision, but they are all there to look at all sides, Sid reminds Frank that his side has all the unions on it. Frank doesn’t think it is a bad nor good idea, but the time has come since Larry came up on the roof wearing the uniform, sweating and gasping for air.

Anthony returns to Erin, admitting that Sam was fibbing and he owes the DA an apology. He thanks her for the extension but he isn’t finding any pleasure of putting the killer away. He is more concerned about where the kids are ending up, telling her about Sam being locked out of the house for hours. She demands that he step down from the case, even though he objected.

Sid arrives at the squad room after he heard they were digging into his case. Baez admits that he was right, they know he wasn’t covering for Sloan. He reveals at the time, he was going through a rough time and worried this might have been one of those cases that slipped through the cracks, embarrassed they would solve it so easily. Baez and Danny don’t have anything new on Sloan and Sid offer to help them.

Eddie and Jamie are doing laundry, with her confessing she did as he told her to do; but he insists he simply requested and will clear up the chatter about Rachel getting Larry fired because she called him fat. Jamie isn’t asking her to keep any secrets, just not join any organizations since she is about to be a Reagan. She is bitter and wants to know if a gunshot wound would get her excused from family dinner. She mocks him, asking if there is a list somewhere, demanding to know why all the men get to join a fraternity but she can’t. She wants to know if there was a list, as Jamie questions if she can only fix the hurt on Rachel’s face by joining her softball club?

Sam goes to see Anthony, saying he is off the case so he can defer him. Sam reveals he has locked out again so Anthony brings him in and feeds him. He is told he can’t have a key since he is 16 years old and she doesn’t need him to have any key. Sam enjoys the pasta, as Anthony explains what was made.

The following morning, Frank is shown a mock-up of the newspaper. Garrett feels Frank is as vain as Sid is about the NYPD. Frank insists he is only protective as Abigail sides with Garrett, he says he won’t use his rank and file to do it, as this is more of a “who” question, rather than what to do?

Sloan has several witnesses for the night of the murder, but Baez doesn’t buy it. Sid finds 15 people who all hold federal firearms licenses, suggesting Sloan has been pushing paperwork for the ATF for decades and all 15 of these people needed their forms filled out to qualify. Sid believes Sloan probably bribed them for their alibi. Sid is raring to go when Baez quietly confronts Danny about planting that paper for Sid to find; Danny plays like he has no idea what she is talking about.

Sid brings Sloan to interrogation, as he talks freely about Caroline, saying she was a saint and they never fought. Sid talks about him and his wife going through some rough stuff blaming himself for forgetting his wife’s birthday for years. He says therapy helped them, as Officer Lou Simon recommended him, saying he was a great guy. When Sloan denies knowing Lou, Sid says that is funny since Lou recommended the same shrink to Sloan and Caroline. He admits they had disagreements but when Sid asks if that was what led him to kill her. Sloan said he was going to leave his wife, but Caroline wouldn’t listen to him. Sid slides over the file, asking Sloan to help Side help him!

Danny tells Sid he is a little rusty but still has it as Sid thanks him for T’ing up that evidence for him before leaving.

Anthony congratulates Erin for indicting Judith Johnson for murder that morning. She asks how Sam is doing, Anthony says he will be okay. He admits he is signing the papers later today and will foster Sam himself. He feels he is helping a kid out, who is almost 17 and when he is 17 and a half he could take the NYPD exam and at 18 join the military; it is the deal they made. He didn’t always want a son, but one came knocking and he answered the door; Erin leaves after shaking her head.

Danny talks to Eddie about how he had many discussions with Linda (Amy Carlson) about her going back to work. He didn’t want her to, but in order for her to be happy he needed to support her. Danny says this problem they are having is about the same stubbornness in the Reagan DNA. Danny explains how their brother, Joe died after he joined an organization called the “Blue Templars”; a group that was supposed to police the police; things changed and when it went rotten, they killed Joe, also attempting to kill Jamie. Danny says this is why Jamie gets so deep and hopes that maybe Jamie will listen to him, as Eddie says she will let him know if he has her permission.

During family dinner, they discuss bacon and Danny says they can eat whatever they want as long as it has green salad beside it; Erin suggests Frank put that in the patrol guide. Nicky (Sami Gayle) learns about the possible testing, causing debate to happen between Henry “Lou” Reagan (Len Cariou) and Frank. Danny wants to know how he will legislate that, asking which cop they would want to lose because they are out of shape. Jamie and Eddie join the debate, saying in a perfect world all 3 cops could hop the fence; Frank tells her when she finds the perfect world send him the address.

Johnny Lyons, Union Rep, returns to Frank’s office where Frank tells him he cannot have it both ways. He doesn’t want to fire any cops but he wants them to succeed. Garrett shows him a folder with his photo from the 1990s in it. Frank learns he had gastric bypass surgery, something Garrett suggests would get out as it was cosmetic surgery and not lose it the natural way. Garrett says people would take the physical exam because they will get cut pays on their insurance and new officers would have to sign a mandatory yearly test. Frank says together they have just raised the bar and that is what Johnny is to tell recruits.

Eddie talks to Rachel about her softball games, excited to see how their next game will be. Jamie reveals to Eddie that he spoke to Danny, admitting he will continue to use the “if I were you!” part, but if he forgets to change his wording, maybe she can remind him. He says only she is herself anf can make her own decisions. She smiles and agrees. Jamie throws her a baseball glove, asking her to be careful out there.