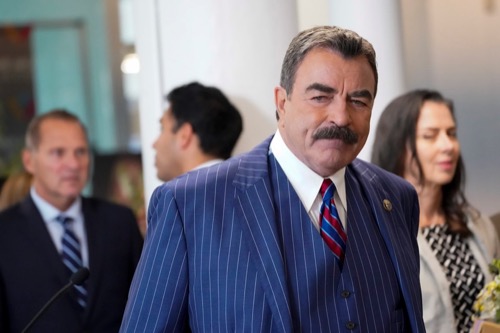 Tonight on CBS their hit drama starring Tom Selleck Blue Bloods airs an all-new Friday, October 11, 2019, episode and we have your Blue Bloods recap below. On tonight’s Blue Bloods Season 10 episode 3 “Behind the Smile” as per the CBS synopsis, “Frank’s esteem for an old friend and late socialite proves to be a mistake when her son threatens to publicly reveal who she really was.

Also, Jamie asks Erin for help apprehending a perp who shot at him after learning she chose not to send him to prison six months ago; Eddie clashes with her new boss, Sergeant McNichols; and Danny drags Baez into a case involving a suspicious grieving couple.”

Tonight on Blue Bloods, while patrolling the streets Roland and his partner encounter a man trying to break into a car as they approach and tell him to put his hands up the man pus out a gun shoots and run, Roland gets hit and is on the floor as his partner s calls for backup.

Danny encounters a strange Asian course who does to the mother every couple of days searching for a Jane Doe as he questions them they suddenly get up and leave refusing to talk to Danny, he goes to do some investigating and turns out they have a son in the NYPD They go question him and it turns out the Jane doe maybe his missing sister.

Eddie and Witten are called to a crime scene as they are about to get off shift and the commanding officer seems.to have an issue with Eddie since she is newly married to Jaime Reagan, making remarks to her saying she now feels entitled since she inherited the last name.

Frank is asked to give a speech to an old-time friend he has known but her son Matt whom she cut out the will is against it and tells Frank and his team his mother was not ready as she seemed, prompting Franks team to investigate her past and not all good news, he decides to talk to Matt he is very angry he was left out the will and it turns out his mother never cut him out the will which was written by his father, telling him that his anger is misplaced to the wrong person.

Jaime wants to go after the suspect manny who shoots at him and Roland the incident scares his partner and comes up with a plan to catch him but doesn’t Eddie and Rachel are met by the man named Eli who was at the crime scene and says he saw the man who killed the woman from the pool crime, the Sargent over the two women are upset that they didn’t inform her of this information.

Danny comes up with a plan to bring in the assignment family Chen to the more by taking a call telling them a Jane doe has been found, when they get there Danny tells them, he asks about Jill their daughter and why they haven’t called the cops for help, that’s when the father tells him they are the ones who killed Jill.

Danny brings the Chen couple back to the precinct for questioning, they tell him that an arranged marriage was made and the man was abusive to Jill and her mother, and that one day they went looking for her and both the man and Jill were gone, their son comes storming in blaming them for Jill death, they have disowned him because he chose to become a cop which is against their beliefs, Danny vows to help to locate Jill and her husband Chen’s son offers to help locate his missing sister and husband along with Danny.

Nicky tells the family that she will be leaving for a job interview and they are worried about it at first because Jack has left too, but then wish her luck. Erin asks Anthony to bring his brother Leo into catching the suspect who shot at Jaime and Roland but he refuses to go back into his old life, he gives in and meets up with manny the suspect, at a staged drug exchange, and the plan goes accordingly they detain him.

Frank speaks to Matt’s sisters Mindy and Misty telling them they only have each other and should rely on and help each other instead of treating Matt so bad. Andy gets a lead on where Jill’s husband is hiding and Danny reaches him there beating on the man and tells Andy to stop and use his head, they discover that he was making fake passports for him and Jill leaving the cops to think she is still alive and they search the apartment and find Jill bound and gagged, they free her and she goes running into her brother Andy’s arms.

Frank goes ahead with his speech at the for his old friend Mary Jane Kaye and Matt seems to come around and ends up giving a touching speech at his mother’s honoring and opening of her new business.